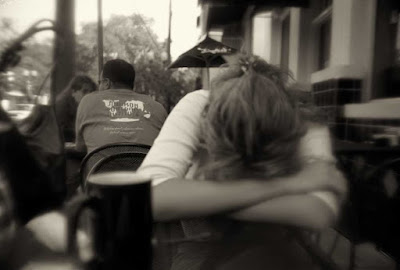 It's 9/11.  I don't wish to relive it through television specials or journalistic pieces.  It seems never to have ended.  It seems we live with it every day.

So my memory of the day is merely personal.  It has not wide-ranging importance to anyone.  Like everyone in America, I remember where I was when the first plane crashed into the first tower that morning.  I was at the gym.  I heard the news on the radio.  No one was certain what had happened yet.  By the time I got home, the second plane had hit the second tower.  It seemed unreal, even looking at the images on the television screen.  One knew right away that things had just forever changed.

The night before, however, I had decided I could no longer continue things with N.  I'm certain she had already come to the same conclusion.  She had moved and was at the university a couple hours away.  It was impossible, really, and unfair.  I, of course, was confused as to whom it was most unfair.  I had tried to end the affair before she left, but she had not wanted that and so we lingered on.  When it was no longer possible, though, I wanted her badly.  Why had I been so stupid?  I was like Issac Davis deciding he wanted Tracy (link).

Unlike the movie, however, the story didn't end with a Gershwin song.  Of course.  And so, I wrote a long goodbye on Sunday night, an email that I sent late after a number of whiskeys.  I would wait for her response.  That was 9/10.

And that was that.  For a long while, at least.  We didn't leave one another alone for a number of years, but those are tales for another time.

Q lived in the East Village but was in Manchester that day.  His girl, C, was in class at Hunter College on the Upper East Side.  They were the only people I knew living in NYC at the time.  They were both O.K.

I began a new journal that day and titled it "New World Journal."  Indeed, it was.

Good old N turned out alright.  She got a job with a major magazine and moved to New York.  Her career took off and she became famous in the fashion world. You can look her up.  There are many photos of her in the Getty Image Library, by herself and with the very, very famous.  We stayed in touch for many years and I saw her a couple times, once here and once in Manhattan.  Then she met the boy she would marry, and I haven't heard from her since.  I check in on her online like a creeper from time to time.

There is so much more to say, but I am not poetic today.  I have been purging since moving home.  I've only eaten soups and have limited my drinking to one or two whiskeys a day.  Last night, however, I fell hard off a speeding wagon.  The world was, I guess, just too much with me.  I am slow and groggy this morning.  I haven't the energy to go searching through old emails and journals for words from the past.  All that jazzed me a few nights ago overwhelms me this morning.  The past is a grand place to visit, but I wouldn't want to live there.  Those journals are evil.  I wrote everything there without censorship.  There is joy and depression, danger and lust.  There are things I should regret, perhaps. . . but I don't.  What is clear, though, is that we were all living through a different set of paradigms and assumptions then that look foreign to many now.  N and I were living on the very cusp of change, I looking in one direction she looking in another.  I know that the intersection of our affair was of profound importance to her.

I know that the end of it was even more so.