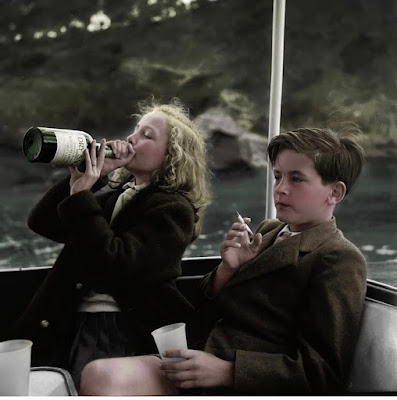 I left my laptop at my house again, so I'm on my mother's this morning which means I can't read the N.Y. Times.  Which is probably good for you.  It distracts me from the nothingness of my life and then I opine stupidly about The Texas Taliban or some other thing you already know about.  Still, it takes me from the hollowness of my own empty life.
My art dealer sent me this photo yesterday.  Apparently it is very well known.  I had never seen it before.  German royalty from the '50s.  Colorized.  It is important to bring kids up right, of course, whatever that means.  Surely these two were more interesting than the kids I grew up around, though I must admit, they smoked and drank, too.  It is not simply the smoking and drinking, of course.  The air of sophistication is what strikes one.  Holy smokes, those kids are handsome, too.  Probably have all their teeth, etc.  I don't understand people who are against royalty.  People need something to envy other than Grizzly Adams or Grandpa Walton.  That's why I have always liked those Hilton girls, that pathetic blend of faux-royalty and hillbilly idiocy wrapped in a pretty package.
But Paris would be ashamed to walk across the campus of Country Club College today.  There are hundreds of girls there that would break her heart. They've learned the lesson and trumped it.  There are skinny blondes with hair lighter than the sun draped in the most expensive sensuality you will find anywhere.  You wouldn't want to be a schlub on that campus.
That's why I stay away.
Meanwhile, since the advent of map apps, schlubs have taken over the Boulevard, at least on weekends.  They come in their crummy t-shirts and cut off jeans and wander around like they are at Disney.
I liked it better when I was the only one.
Yup, those little Nazis at the top of the page look great.  You'd never know they lost the war.
You don't have to BE and aristocrat.  You just have to act like one.
Is anyone still with me here?  I become more bitter every day, I know, and it doesn't just show up in my writing.  I'm afraid it comes out in my daily life as well.  You need only ask my mother.  I am getting sick of myself, I must say.  But change is a-coming.
Late yesterday afternoon, after spending a fruitless day at my house, I went to the Cafe Strange for a mimosa.  It was as hideous as usual, but isolation has not helped me find a more comfortable spot.  When I went back to the house, I called my mother to see if she was o.k. and to tell her I was going to get some sushi for dinner and eat at home.  She was fine with that.  Oh, Lord. . . .  The evening was pretty comfortable, so I ate out on the rotting deck with my feral cat who obviously has missed disdaining my company.  We had a swell time, she and I, me throwing down the occasional food for her, she acting as if I were trying to poison her before eventually eating it.  And when that was done, I lit a small cigar and poured a scotch, and it was just like old times.  Yup.  I remembered what eating alone and wishing for something else was like.  I remembered it well.  Soon I won't have my mother to blame for my. . . whatever it is.  But, I think, my bitterness will turn back into that empty sadness I have become so inured to.
While I was home, my neighbor who has been feeding the feral cat while I have been away came over to tell me that they were leaving for ten days on a trip to Eastern Europe.  My art/travel buddy leaves for over a month on his own European trek in a little more than a week.  C.C. and his wife are headed for Paris.  My conservative republican friend is in Europe all the time.  Me?  I'll just sit here and read the daily news to you.  I'll provide my casual observations.  You know. . . keep you informed.
By god, though, that picture.
When I came back to my mother's house, I told her we were going to watch a movie I watched about once a year, "The Long Goodbye."  I put it on and she was asleep pretty quickly.  Not her sort of thing, I guess. I have to say, it wasn't the same watching it here as it is at my house.  The noir-ish humor of it was somehow lost.
Selavy.  I'm thinking I'll make my move home after Labor Day.  But then, you know. . . with the storms and all. . . .
Posted by cafe selavy at 8:43 AM