The Brawny Romance of Dreams 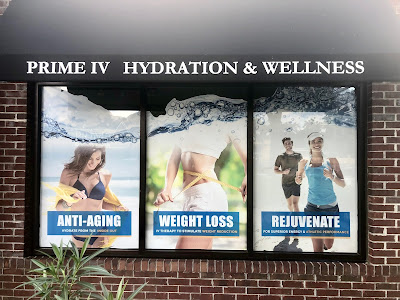 This place just opened up next to the Cafe Strange.  It's a hydration station, I guess.  Next time I am at the cafe, I think I'll walk in and see what it is that they do.  I read an article today in the Times that said all the concern with drinking water is pretty much rubbish.  Doctors and/or scientists (I can't remember who they were quoting) said the rule is that you should not overthink it and should drink when you are thirsty.  Problem there is I don't get thirsty.  Even as a kid.  Almost never, anyway.  I'm curious about this place, however.  I'd like to lose weight, rejuvenate, and look younger.  It must be true.  It's right there in the window.

Tonight is the Harvest Moon.  I won't link another version of the song this year unless I make a recording of me playing the ukulele that Q gave me and singing.  That could be coming later this evening if I am drinking.

I am trying to cut down, however.  Last night, I smoked a little boo before bed.  I held the smoke in my mouth and let it cool down before I inhaled.  Burned a little, but I only coughed once.  But boy did I have the sweetest dream.  And it seemed so real.  I fell in love.  She wasn't the prettiest girl in the room, but man, I was all about her.  And she me if you can believe a dream.  She was with a boy and I was with a girl but the electricity between us filled the building.  Such sweet and loving glances, the shocking sensation when we touched.  See, it was a love dream, not a sex dream.  I dream of romance.

I had to get up around 4:30, and I realized I'd been having the dream the entire night.  When I went back to bed, I tried everything I could to crawl back into the same dream.

Everything after that was the usual uncomfortable mess.

But you see, I am feeling something other than the pain in my hips and back.  I took my mother to the pool again yesterday and I swam.  I'm a mess and it is really difficult, but afterwards I felt sleek.  Sleeker, anyway.  Looking past my big belly at my reflection in the sliding glass door, I saw a few muscles once again.  Brawn.  I would call it brawn.

Last night I boiled shrimp and made some yellow rice and cole slaw, a real southern cracker meal.  And damn it was good.  While I was cooking, my mother took a phone pic of me from behind.  She said, "Here's something you never get to see."  Broad shoulders, broad back.  Not bad for an old man who was almost run over to death.  Nope.  You know, though, I give it the old college try.

Of course, it may just have been the boo.

In all likelihood, I won't get to see the Harvest moon tonight.  It is the rainy season here and the skies may be cloudy all day.  But there's a chance, and I will be looking.  Perhaps I'll stick with a little Pinot Noir, the last full moon of summer, and a tiny toke.

Right after making dinner for mother.

I'm a bit tired of hauling big cameras around all day only to find the plates fucked up at night.  I am thinking of going to a cafe today and writing some.  I have an idea for a series of sketches inspired by reading Buk.  His best stuff is when he remembers people or events.  His worst stuff is when he wants to opine about people or the condition of society.

We all do too much of the latter and not enough of the former.  Well, I do, anyway.