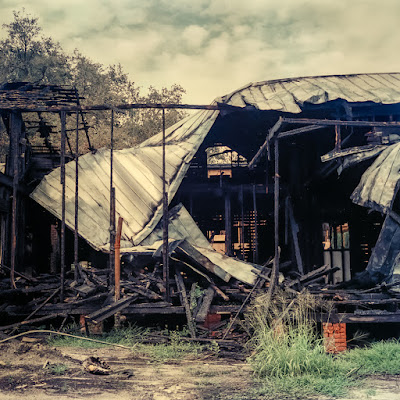 Southern Gothic, pt. 2.  I can't decide which one I like more.

Yesterday afternoon, my tree guy stopped by.  I haven't seen him in almost a year.  He is from Malaysia and said he had to go home.  His mother died in January, the day before his birthday.  He stayed, then went to Singapore, then he flew his son over and they went to Japan.  Things had been so stressful, however, he had to go to Thailand to chill.  Ended up in Phuket.  When he got back, he went to Cuba and got stuck there for awhile.  Now he is working again. He said, "I'm going to get my guys to come by tomorrow and just do some maintenance on your trees."

"Uh," I moaned, rubbing my index finger against my thumb, "how much?"

"Don't worry.  Whatever you can afford."

He'll be here today.  He said he was bringing me lunch.  I'll certainly have sticker shock in the end, but they do great work.  My palms will look like Palm Beach again.  They will cut the big shrubs away from the house, trim the ligustrums, take suckers off the big camphors, and pull vines.

I think his secretary is making lunch.

When the garbage men came by yesterday, they honked the horn and wished me a good weekend.  The yardmen like me, too.

All that should be enough.

I've spent a couple nights watching the worst Woody Allen movies ever made.  I had not seen them before.  How I knew not to watch them before, I don't know.  But they were miserably bad, even for a fan,  "Melinda/Melinda" and "Scoop."  Even Scarlett Johansson could not save "Scoop."  They were horrible movies.

The good news is that I am feeling better by increments.  I spoke with the other fellow who got this, and we agree that if we had not been vaccinated, we would have ended us in the hospital.

In hospital.  Why do the British drop the article when they say this?  You don't go to the hospital.  You go to hospital.

Sorry. Anyway, he is still a little sicker than I.  His wife, he said, is a couple days ahead of him.  All of us vaccinated.  All sick for more than a week.  Now. . . the long recovery.

The tree guys just pulled up.  It makes me jumpy.  I have gotten used to the long boredom of not dealing with people.  I can feel fingers in my pocketbook already.  Last year when he came, I had Mr. Fixit.  That is when the bathroom came apart.  Months of Mr. Fixit, tens of thousands of dollars.  Trauma.  I am reliving the trauma now.

Was it only a year?  Was it already a year?  Are the Holidays almost upon us?  Soon it will be two years.  I can feel my spirit flagging.  Long, lonesome Covid retirement.

But save that for later.  I will go to see my mother soon.  Redux.

Another knock on the door.