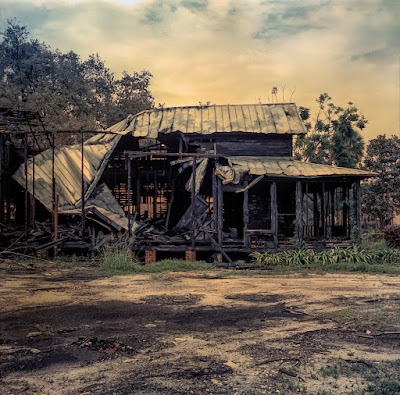 I don't "do" social media, so I am not the guy to comment on it.  I'm not a Luddite.  I have some faux accounts I use for photography, but I don't use them to keep up with family or friends.  It has never appealed to me.  It is as simple as that.  So take anything I have to say about it with a couple grains of salt.

Social media is bad for kids they say.  Duh.  Don't they get enough of that face to face in school?  Schools are social torture chambers of competing hierarchies.  Every teen movie ever made is about school losers, geeks and freaks, against those controlling the narrative.  Getting away from school was the reprieve.

Social media is just more of that.  At least that is what I've come to find.

I've joined a couple photography groups on Facebook.  That is how I learned (almost) to make those dry plate ambrotypes.  I also correspond with some photographers on Facebook as well.  Once in awhile, I'll post a photo to a group, but by and large, I am not an active part of "the crowd" and am pretty much ignored.  On the dry plate page, for instance, I somehow pissed off the page moderator.  Not somehow.  As you know, I have been having trouble getting my plates into focus.  The fellow who made my Liberator camera said that it was the plate holder.  This all happened publicly on the site.  The moderator doesn't like the fellow who made my camera and he started sending me private messages about it all.  I didn't want to get into a shit show and just didn't respond.  When I post to the site now, he doesn't react.  Nor do the wags who people the site.  It is fine with me as long as I keep getting the technical info that I want and need.  I can be a spook on the channel, so to speak.

Two days ago, however, I posted a photo that I shot with negative black and white film to a couple related groups--large format and Graflex camera sites--and for whatever reason, they blew up.  The "likes" just kept pouring in--ding, ding, ding!  Wow!  I was a popular kid.  I felt full of endorphins, of course.

This continued for two days.  Then the fellow who runs the site on which I am a pariah posted something on the other sites related to something I had commented on on his site.

I maintain an Instagram site.  Maintain is about the right word because I don't know how these things work.  But. . . yesterday I read an article on how to use hashtags.  I had no idea about this, but I decided to put some on a photo and post it.

Goddamned if I don't think I was getting a chubby.

I'll never reach those social media heights again, I'm afraid.  I just don't want to.  It is a game like the experiment with the rats pushing the button to get either food or cocaine.  Eventually they starve to death.

If I were Modigliani, of course, it wouldn't be crack, it would be mere bread and a roof.  I am not Modigliani.  Nor am I Bonnard.  I am not earning my living that way.  But the old artists, I think, were playing the same game.  Whose cock would you have to suck this week to get into the most esteemed galleries?

No, I have gotten enough of that in my life.  There are people who thrive on social acceptance.  They need the clicks whether it is online or in social groups face to face.  It plays its role everywhere, of course.  Even at the factory.

In trying to please the market, there is certainly a kind of death.  "Art"?  "Soul"?  No, nothing like that.

What I do know is that being "liked" is its own hell.  There is only one direction from there.

But as I qualified in the beginning of this little rant, I am not the person to speak to this.  I really don't know much about social media.

Quarantine has given me some time to play with photos again.  I mean, there was nothing else to do, so I developed some film and scanned it and fooled around in post.  And Voila!  Today's photo.  I took this with my Hasselblad and developed the color film at home.  This still amazes me.  In just about twelve minutes, start to finish, my color film is developed.  And it looks great.  CineStill has made a very good product.  I just haven't any interest in making digital images right now.  Just film.  Big film, too.  Medium and large format.  I developed a roll of 35mm black and white this week, too, and those smaller frames just look puny.  No, I like those big, punchy negatives I get from the larger cameras.  And that is what I'm going to shoot.

Now to get some cajones.  Oh, it would be better not to have them, I think, to be a female photographer.  I would have more access to things I want to photograph, I believe.  But I have thought about it, and I can't shoot in drag.  It's just not me.  So. . . I need to ride a couple of pumpkins to make my photos, for indeed, it is scary.  Or at least it is for me.  People are so problematic these days.  Nobody seems to be cheering for the old (white, cis-gendered) man with a camera.  I get yelled at just walking down the street with one.

Speaking tangentially of which. . . I watched the Dave Chappell special on Netflix.  It wasn't funny.  It wasn't even interesting.  It was painful.  It was titled "Closer," but it should have been called "Whiner."  Watch it if you want. . . but don't blame me.

Still a few more days of lockdown.  That's o.k.  I'm still not feeling great.  Age has probably been a factor. But I cooked my first meal last night.  Made a salad and some spaghetti.  I even opened a bottle of wine.  I didn't lose my sense of taste or smell, but I think they are quite off.  I couldn't drink the wine and the spaghetti just tasted blah.  I'm still not cafe ready.

One more note.  I have an iTunes station with my name on it.  It is my music and the music the Apple algorithms think I will enjoy.  The station was spectacular yesterday.  A song came on that stunned me.  It was beautiful.  I ran to the computer to see who it was.  Then I sent it around to friends.  I'll admit, no one wrote back in glee.  I looked up the artist to see if all her work was that good.  Nope.  What a terrible shame.  But the one song, I think. . . oo-la-la.