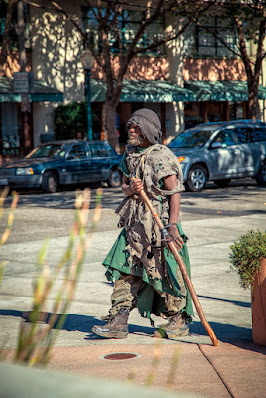 Depending on the species, the average lifespan of a squirrel is three to five years in the wild.  In captivity--ten.  The same is approximately true for rabbits.  I assume that it will be the same for any animal--shorter lifespans in the wild, longer lifespans in captivity.

We are captive humans.  We would probably live to be about thirty-five in the wild.  And that's if a lion didn't get us while we were young.

Yes, we are domesticated.  And for all the bad chemicals we are exposed to on a daily basis, average lifespans are growing.

That movie I took my young friend to see about Gauguin a few posts back, "Wolf at the Door," was themed after this fable (link).  It is part of our romantic legacy.  I imagined I lived my life by that when I was young.  Now I am old, due in large part to the fact that I really didn't.  Oh, I chanced my life quite often, but dying never seems as scary when you are young.  It is only as I have gotten older that the final act has terrified me so.  For most of us, I believe, the biggest disappointment in life is going to be living too long.

But don't worry.  I still have some things I want to do.

I waited around all day for the plumber.  He didn't show up until 4:30.  I gave him the line I said I would about how easy installation was going to be according to the ads.  He said that may be true, but removing the old stuff was going to be the difficult part.  Then he made me sign an estimate on how much this would cost.  "Holy shit!" I exclaimed feeling my testicles suck into my abdomen.  To kill the pain, I poured a cocktail and sat outside the kitchen on the deck with the door open so I could hear him groan and complain.

Yes, he had to hammer several pieces apart.  He came out to show me.

"Look at this.  Metal on metal.  Why wouldn't they use metal on plastic?"

I panicked for a moment.  I didn't know the correct answer.  To cover my uncertainty, I squinted my eyes, nodded my head, and took a slow sip.

"See, after awhile, metal corrodes and you can't get them apart," he continued.  "They become a solid block."

"Motherfucker," I said.  "They just aren't thinking about the future, I guess."

"Sure, but I'm going to have to get you to sign this estimate on what it is going to cost you," I laughed.  He just gave a weak grin.

Finally, he had everything apart.  I poured another drink and continued to sit on the deck.  I scrolled through my phone deleting photos and voice messages until my phone was almost dead.  People walking by would wave and say hi.  Some stopped to talk for a moment or two.  The day turned to night.  I was hungry having eaten only some cheese and apple and crackers all day.  With wine.  And having had a couple cocktails while he worked, I was getting shaky.

He finished up at 7:30, but he didn't seem in a hurry to leave.  He sat down at the table and became chatty.  I'm a nice guy, so we ended telling tales of growing up in this town before it was this town.  When he was finally gone, there was nothing left to do but procure some Popeye's chicken.  I think I have gotten addicted since getting Covid.  This is the third time in a few weeks.  It is so bad, though, that it is good.  Really good.

The new faucet looks better than the old one.  True.  I am in no way disappointed.  It is a fine faucet and it works well.  Still, I'm waiting for something to go wrong.

The maids come today.  They will do something to break the new hardware, I am sure.  The old Wrecking Crew.  I think this company gets their helpers straight from the jungles of Africa and South America.  Don't get on me.  That is where the husband and the wife are from, respectively.  They have connections.  I don't think the women cleaning my house are familiar with snappy modern things.  And I know they are brutish.

The problems of the privileged, eh?  It is so hard to find good help these days.

Even the feral cat is getting cosy.  She stayed on the deck with me through the entire plumbing adventure.  She kept walking to the open door and looking in.  She walked up to me coming as close as one foot.  These are new behaviors on her part.  Perhaps she is willing to give up some liberty for comfort, eh?

At evening's end, I watched a documentary about a group of crazies sailing a 120 foot boat from New Zealand to Patagonia by way of the Antarctic (link).  The boat was not built for this kind of sailing.  They bought everything on the cheap and had to continually make repairs at sea to survive.  There was a time when I would have been, like. . . YEA!!!!  But last night, I didn't think I wanted to go.  I did feel ashamed, however, that I didn't install my own sink and disposal.

And that is how I ended my night.  With that and one hit off the old pipe.  And as has been the norm for awhile, my dreams were by turns sensual and sweet, then weird and disturbing like a David Lynch movie. I am, I must say, quite fascinated.

So. . . hat is it for today from this Domesticat. We'll have to wait and see what the new day brings.