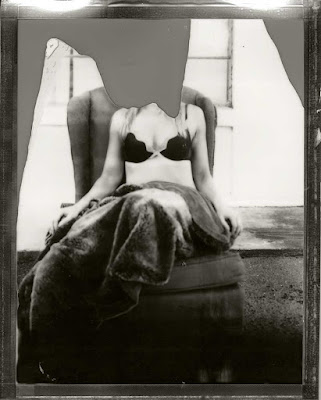 This photo has become quite popular on some forums.  It's an old 8x10 Impossible Instant Film image that shows how impossible the film really was.  The faulty part of the image happened because there was not enough developer in the chemical pod to cover the entire photo.  Selavy.  But the implications are huge, no?

I should colorize it.

The Professional Cleaning Crew was here yesterday.  I went out while they were here and ran some errands then went to my mother's to sit and chat.  When I got home, everything was spic-n-span.  I don't know how they do it.  I really don't.  Nothing ever sparkles or shines when I have finished cleaning.  I don't know how I feel about them coming on a Tuesday, though.  I guess it is O.K.  I mean, I don't really have weekends any more.  When I was working and they came on Fridays, oh. . . what a treat.  But I don't come home from work on Fridays any more, so I guess it will be fine.

Tonight is the Hunters Moon.  Or is it possessive--Hunter's?  Well, to use an old baseball saying, I don't have perfect pitch when it comes to such things.  Speaking of which, did you see the Astros and Red Sox? I didn't.  I can't watch sports any longer.  I can't take the commercials.  Sometimes, however, I will start recording the game and then start watching about an hour later.  Usually, after skipping the commercials, I will catch up before the end of the game.  I might do that with the World Series.

But there is nothing I can do with YouTube.  I am going to have to abandon it.  They stop playing content ever few minutes to run asinine commercials.  Surely some other platform will take over publicly displayed content so we can leave YouTube to people who want to pay to watch their "original" programming.  Vimeo, maybe.  Let me know.

I realize that many of you come here mainly for my media recommendations.  O.K.  Joke.  But I watched something I thought was a series about which I was going to be very excited last night.  Much to my surprised dismay, however, it turned out to be a movie.  It would have made for a great miniseries, but I would still recommend it (link).

Covid kicked my ass.  I think I'm fine now, but yesterday I got a flu shot and felt achey right away.  Could be in my head.  I'm kind of like that.  But I haven't been to the gym for almost a month, and I think I might give it a little go today.  Just dip my toes in the water, so to speak.  I look like Gumby's fat brother right now.  It could be permanent.  I don't know, but I have to at least make an effort.  All I want is to regain my girlish figure. 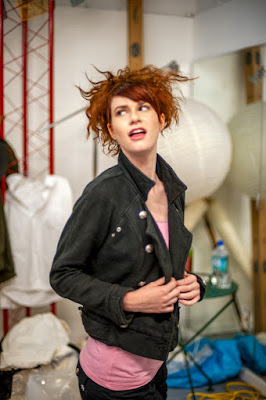 And look, in spite of my playing idiot, I know about perfect pitch.  And in case you were being snotty about my joke, it is "despite" not "in spite of."  Gotcha.

Maybe.  Maybe not.  I'm just having fun.  And in spite of/despite what I said about YouTube, here is the song that plays at the end of the movie.  I think it is a darn good one.