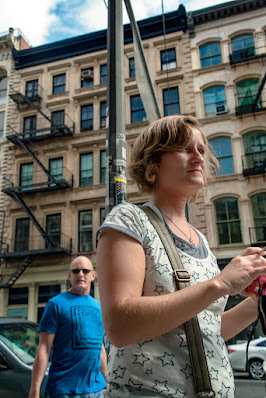 Ooo. . . what a feeling.  I just wrote an entire blog post and deleted it.  Start anew.  Begin again.

I got up early this morning.  I am going to try to be more productive with my days.  I sit too long reading and writing, and by the time I have gone to the gym, showered, and eaten, I'm halfway through the afternoon.  "Oh. . . it is almost time to go to mother's.  Maybe I'll run to the grocery store first."  Or liquor store or whatever.  That has pretty much been it.

When I took the garbage out, the sky was a fiery red.  Sailor take warning.  There are storms a'coming.  Not like that nasty nor'easter that has knocked down the neighborhood of my art dealer.  But you know, I have PTSD when it comes to stormy weather.  This afternoon will be a bust.

Here's one for you.  Do you think in words or images?  I know, "both," but which predominates?  And what about your dreams?  Of course you dream differently than you think, right?  When I woke this morning, I realized that I am often narrating my dreams, commenting on the images that drift by.  Is that common?  Probably.  I had just never realized that I do that before.  I am like a sportscaster or something.  Dreamcaster, that's what I am.

I went shopping for snacks yesterday at Whole Foods.  You might say, "That is not a snack store," but I am trying to change my behavior.  I make a big bowl of cherry tomatoes, sliced cucumbers and radishes, and sticks of celery, salt them lightly, and eat that after dinner.  Yesterday I also bought some hummus and some pita bread.  I have a hard time with hummus, though.  Sometimes I get it and am put off by it.  I think I need to start making my own.  I've never done that before, but it should be easy.

And a Panettone cake.  Or bread.  Whichever it is.  But it makes a near perfect breakfast bread, better, at least, than eating cinnamon buns or strudels with my coffee.  No, there is a mere hint of sweetness in the Panettone.  I am having it now and am thrilled.

And so, I guess, that is the unofficial beginning of my holiday season.  I will sit with my mother at her house and pass out candy on Halloween.  And when we wake in the morning, it will be the season of the long nights.  Fuck the time change.  Nobody likes it.  I think there are something like a dozen states that no longer switch.  My own state voted to keep daylight savings time, but the legislature has excused it saying we will change when it becomes federal.  Does Biden have the ability to get us out of this travesty?  He should.  It might help lift his approval ratings.

And then we head to Thanksgiving.  My mother's neighbors have invited us over for Thanksgiving dinner.  They have been very nice to my mother while she has been injured and have cooked a lot of meals.  They had us over for a little party not long ago.  But going to T-day at their house. . . I can't think of much I'd rather not do.  I, however, can see no way out of it.  Holy Mother of God.

A couple weeks after that, my mother turns 90.  I will have to do something large, but I am no party planner.  Should I hire one?  I think I will just put one of those big signs in the front yard that says "90" and set up a table with food and liquor.  That's about the limit of my party planning.

And then we plunge into Christmas.

Seven years ago on Halloween, I bought the Vespa.  Ili and I rode it around that night not knowing the headlight was burned out.  We were in pajamas.  It was fun.

I've not had fun for a very long time now.  People keep urging me to travel, but there is something in me that resists.  I don't know.  It just seems to me that everything is different now.  The world does not seem as interesting or fun as it used to.  I can fly round trip to NYC for $61.  No, I'm not kidding.  You would think I'd be on the next plane out of town.  Of course the ride from the airport to town and vice versa will be double that price.  And the hotels. . . oy!  Maybe they have an elder hostel!  Hey. . . there's an idea.

Well, I've reached the time I said I would go to the gym.  Gotta get my day started.  I am sure it will do me good.

I don't think the fellow in that picture wants to be my friend.