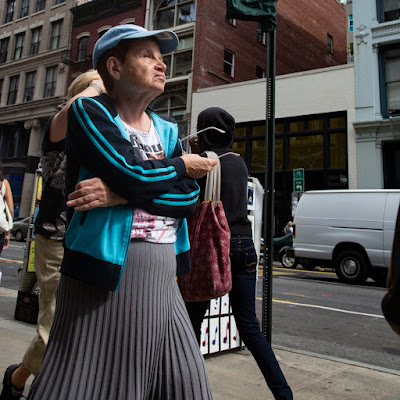 I thought I would use a self-portrait today.  This is how I'm feeling.  Grumpy.  Street photography should be illegal, I'm sure.  Taking people's pictures without consent has to be wrong.  There are those who are morally outraged by this violation of privacy.  They are usually, however, the same people who would object to the photos I made in the studio where everything was agreed upon.  Permissions granted.  To everyone who objects to pictures--here's to you.  We should end photography as we know it.  Fuck, people even object to parents posting photos of their children who are not old enough to give legal consent.  The only legal photography should be selfies.

Besides, this photograph doesn't work.  It is too contrasty. 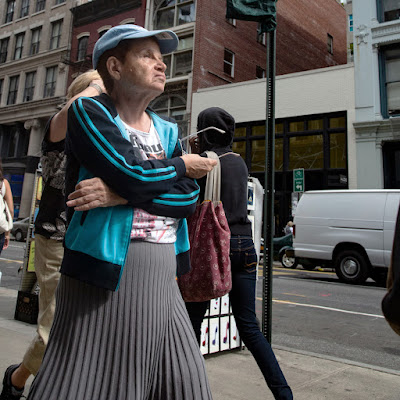 How's that?  See--photography isn't real anyway.  Today it is just a manipulation of pixels, of zeroes and ones.  It's a magic trick.  I'm a sorcerer's apprentice.

Words to live by.

Well. . . that certainly went off the tracks.  Not exactly.  It never was on the tracks to start.

I think I meant to begin the post with a question.  Do you know the secret of life?  Me, neither.  There isn't one.  We are always looking for secret knowledge, but it is a waste of time.  It isn't there.  So many of us want to be like Yeats, trying to find the language of the universe in mysticism or revealed in the crazy babble of his wife speaking in tongues.  Or we just want the insider's knowledge like Hemingway.  He had the "intel."  He was an expert on everything from fishing to how making the perfect pickle sandwich.

O.K.  I'm completely lost now.  I think I was wandering toward the conversation I had with the "academic" yesterday.  I went to the gym late.  I was hoping against hope not to see him.  But there he was.  And right in the middle of my workout, he approached me, phone in hand.

Do we still call them "cell phones" or are they simply phones now?

"I found an article for you.  It is written by an M.D.  It is about the ineffectiveness of masks."

"Oh.  Where was it published?"

He gave me the name of something suspicious sounding.

"That doesn't sound like a scientific or medical journal."

"This has lots of research.  He cites many studies.  He has a long bibliography of articles."

"But it isn't in a juried publication after peer review?  He may not be a good researcher.  He may be cherry picking his information to make a point.  It's the sort of thing we have to teach college students not to do.  They will turn in a paper with lots of citations, but the entire thing is off because the misused their resources.  I'll look at it if you want to send it to me, but this sounds like the sort of stuff that confuses lay people.  To be reliable, it needs to go through the review process by experts in the field and not just thrown up on the internet."

He hadn't been able to sucker punch me this time.  I knew he was coming.  Somehow, though, he turned the conversation to moral values.  People like to assume some expertise on the issue because it isn't science.  We have two halves of the brain, he said, one is factual and the other is creative.  Kaboom!  Now I had him.  The fly had entered the spider's web.  Like the spider, I was in no hurry now.

"Yes, and that is where the trouble begins, isn't it, right there in the chasm between factual information and the creation of meaning.  Scientists have to use language to communicate their findings, but the scientist, too, has to rely on symbols and metaphors.  Scientists are troping all the time.  Language is the problem, isn't it.  We're always trying to say what we mean but we are limited by vocabulary and diction, and even after the message has been sent, reception is full of interference, and we must say, 'No, that is not what I meant.'"

He wanted me to admit to some moral authority, but I had to tell him I was a nihilist.

"Morality is like aesthetics, right?  It is simply a privileging of values."

By the time I'd said all this, however, my workout was ruined once again.  I am not really a nihilist.  I just run into the existential crisis when I want to act.  And though we are born into a hostile world without a guidebook, we try to do the right thing, whatever that is.  Though they are not universal nor divine, I do work from a set of moral principles.  Like gender, maybe they are fluid.  Surely.  But one thing I was certain of--this fellow was a bore/boar/boor. 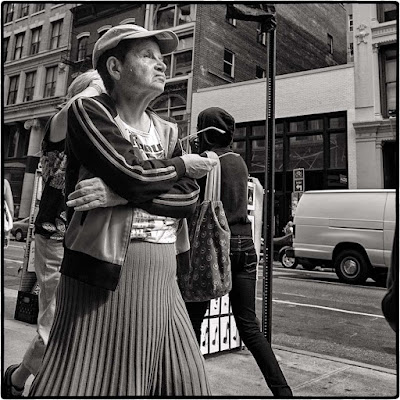 You know. . . I think it works much better in black and white.  But like I said, aesthetics is just a hierarchy of values?  Morality and aesthetics are opposite sides of the same coin.  And if a picture is worth a thousand words. . . .we still have the same problem, don't we?  A message sent must be received; but boy, sometimes the interference is more than we can bear/bare.