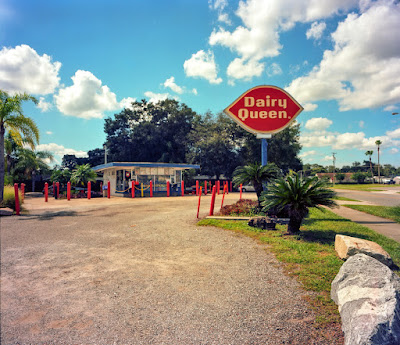 I wanted to tell you about the day I had yesterday.  I really did.  I was out.  I met C.C. for lunch.  We went to the museum.  But that narrative has all been waylaid by the a.c. guys.  I will have to start there first and work my way back.  Maybe.  We'll see how much gas I have.

I slept without a.c. last night.  It was fairly o.k.  Temps went down into the lower 70s.  It was just the humidity that was a little rough.  I had to sleep without it because when I got home yesterday afternoon, the a.c. was running.  It was freezing inside the house, but the thermostat said it was 78.  I tried to turn off the a.c. but the thermostat was having none of it.  O.K.

The repairman had been  just here.  He did the semi-annual servicing.  It was going to be close, but it looked like he would be finished in time for me to meet C.C.  But there was trouble.  I heard him talking to himself, so I knew.  He said the capacitor was bad.  It was under warrantee, so he was going to replace it.  How long will that take, I asked.  Not long, he said.  Fifteen minutes.  I texted C.C.  But fifteen minutes turned into half an hour.  I texted C.C.  Later that day. . . he had to replace another part, too.  It was late now, so I met C.C. at the restaurant rather than at the museum.

Skip ahead.  When I got home and found I had trouble, I called the engineering firm who put in my new electrical box, does my plumbing, and who put in the a.c. I have a service agreement with them, so they should have come out right away, but I was a push over and let them schedule me for this morning.

At the appointed time, the repairman showed.  I told him of my woes.  I did not turn off the breaker in the electrical box, I said, because it also controlled the lights in the kitchen and the power to the internet box, so I just killed the big, separate breaker to the a.c. unit.  That way, the fan was able to run.  Right away, he threw up his hands and said, "I'm not an electrician.  We need to get an electrician out to look at this."

"Why?  There is no problem with the breaker.  The thermostat isn't controlling the unit."

"I don't know what's gone wrong.  I'm not an electrician."

O.K.  This is the part where I lost my sense of absurdists humor.  I live in a hot place.  I need a.c.

"Well," I said in a vocal tone that assumes one's an idiot, "what do you imagined happened?  Do you think the wires just kinda moved and reconnected themselves in some unfashionable way?  I've not had any problems until yesterday when the fellow futzed with the a.c. unit.  Now I have a problem.  The thermostat doesn't control the unit.  The breaker has nothing to do with this."

Finally, I convinced him to try the thermostat.  And guess what?  That's right.  It wasn't working.  I am sitting in a stuffy house now while he goes across town to get a new one.

Within a few moments of his leaving, I got a call from the engineering group.  They wanted to schedule an electrician.  I explained what was going on.

"I don't want to pay for an electrician to come out and look at what your company has done. What he told you was incorrect.  The breaker isn't tripping on its own.  I tripped the breaker.  It works fine.  It never trips on its own."

"Oh. . ." said the lady on the phone.  "If we send out an electrician, you will be charged.  Do you want to wait until he puts in the thermostat and then give us a call."

"Let's say that," I said.  That way I could tell the moron I was scheduling if he said anything.  "Yea," I'd say, "I talked to the office.  We are trying to figure out a time."

So I wait on pins and needles.  He may be malicious as well as being a moron.  Things could get complicated.

Since I was delayed yesterday, as I said, I met C.C. at the restaurant.  I was about an hour late.  He was sitting at the bar when I walked in.  It is a nice bar with nice light, and the bartender was pleasant.  It was a Spanish place, so we ordered many tapas plates and Sangria.  C.C. has done a lot of traveling since I last saw him and had many stories to tell.  Me. . . I had only tales of misery and decline.  Still, we had a good time eating and drinking and chatting with the barmaid.  When we had finished eating, she came back to see if we wanted another drink.

"Do you still want to go to the museum," C.C. asked, "or do you want another drink?"

He ordered a cocktail.

It was three o'clock when we finished at the bar.

"Do you want to go to the museum?" I asked just to be asking.

The main hall was full of Renaissance and Baroque religious paintings from the Bob Jones University collection.  Do you remember Bob Jones?  Fundamentalist Evangelism?  Well, he must have made some money, because the art collection was pretty cool.

And C.C. knows his Baroque art.  I like to think I know things about art, but I was fourth fiddle on this one.

Within a very short time, however, we were told to exit the gallery.  What?

"The museum closes at four."

What the fuck is that?  We were not there more than forty minutes.  We hadn't gotten all the way through the main hall.

The moron is back, and I can feel the malice.  I don't know how this will turn out.

He installed the new thermostat.  Everything is working. . . I hope.  He told me that I was lucky that they had one of these thermostats.  He said it is impossible to get things right now.  They are unable to get parts to repair a.c. units.  They are unable to get new complete units.  Supply chain woes, etc.  He revealed himself as a conspiracy theorist, though.  The news lies to us, so we don't really know what is going on, etc.  So. . . he took one look at me and thought, "fucking lefty" I'm sure.  I believe he brought a certain arrogant animus to the whole affair from the get go.  He keeps trying to school me.  "Air conditioning is a luxury," he says.  "Patience is a virtue."  Trying to be friendly, I asked him where he grew up.  He didn't answer.  Secretive.  Trust no one.

O.K.  I need to finish up with the a.c. guy.  That's my report of incompetence and malice for the day.

Mine, of course.  I mean mine.