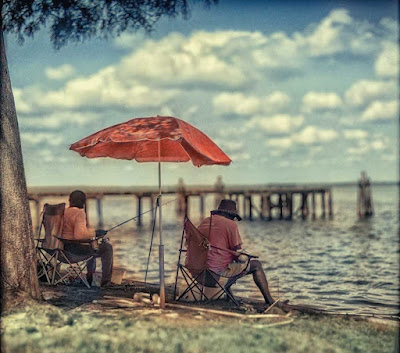 Here it is!  Much better!  This be the stuff!  I took two shots of this couple knowing that in all likelihood one, if not both, would be flawed.  The one I posted yesterday was the flawed one.  Colorized, this turned more pastel.  On the banks of the lazy river, Grit City, USA.  Oh. . . just lovely.

I tried to send copies to the email address they gave me.  Guess what?  It wouldn't go through.  I think no one will ever get the copies I promise them at the moment.  I try.  I do.  One day someone will just gun me down in the street over broken promises.

Dying for my art.

Art?  Ha!  Just dying.  Or so it feels.  This Covid shit won't leave me alone.  I felt better one day and thought I was on the Road to Wellville, but then I had a two-day relapse.  Yesterday felt as if death were sneaking up in crepe soled shoes.  I'm living on Tylenol and vitamin C.  Not quite what the Dead sang.

Maybe today will be the day.

As I try to write, I am getting text messages from Q and c.c.  The texts are about art and literature, of course, and also about Demon Drink.  Alcohol is the Curse of the Creative Class.  Sobriety is for idiots like Noam Chomsky and his ilk. They seem smart until they have to debate some twisted intellect like Foucault.  Then they look just like what they are--intelligent Kiwanis Club members, always looking for the high moral ground no matter the cost, straight as a gate.  Oh, Chomsky was good with Buckley. . . had him on the ropes. . . but I prefer Hitchens if I have to choose.  Too bad it killed him.

In the end, though. . . no matter.  Look at Chomsky now.  Or is that the Unabomber?  Or Prufrock?  Nothing in this life is fair.

The best you can do is not worry too much and enjoy what you can.  That was the advice my dear old dying dad gave me.  "Do what you want," he said.  But you know. . . I've said it before, that's the sticky wicket, eh?  Knowing what you want?

My dying friend wrote me yesterday that he never planned anything in his life.  It just all happened.  "It's just a shit show," I wrote back.  "It doesn't matter if you plan things or not."

Maybe I'll feel better today.  That would be nice.  I'd like to get out soon and have another look around.  I think I have a couple more things I'd like to photograph.