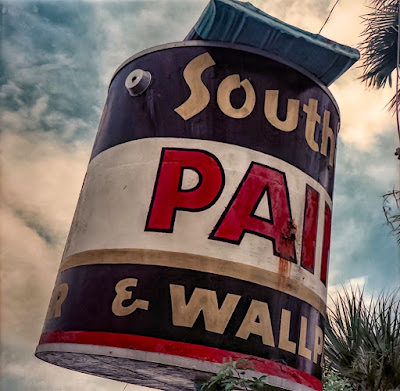 I don't know if I've posted this photo here before or not.  My memory is bad and my files a mess.  I don't think I have, though.  Shot with the 4x5 Liberator camera and developed right here at home.  Scanned on my own desktop scanner.  What a world.

I haven't much time to write this morning.  I need to get my car to the repair shop.  I hope the repair is as simple as yesterday's.  The washing machine repairman came at eleven.  Nice guy.  I show him the washer, explain the problem, and sit down.  In a second, he asks me if I had tried unplugging the washer and plugging it back in.

"Well, its fixed now.  I just need to make sure it runs through all the settings."

"The computer just needed to be reset."

"I unplugged it.  It just had to reset itself."

"Jesus.  You could have told me to try that over the phone."

And that was it.  Just like when you call the cable company and they tell you to try unplugging your box for a minute before plugging it back in.  Seriously, they could put a big sticker on the thing so you know.  Fortunately, I had the extended warrantee.  I fear that I have become paranoid and think that if I didn't, the repairman would have jerked around for an hour or so and charged me for labor and a part.  Yea, I'm jaded.

So. . . do I tell the car repairman that story.  Should I tell him to try unplugging something and plugging it back in?  You know, I just don't think he'd get the joke.  I don't think they are nimble witted at the car repair place.

I am going to need to start doing more things for myself, though.  My income is steady but prices are rising.  The Wrecking Crew just texted me that starting January 1st, they will have to raise their price for cleaning by $20.  I can't do it.  I can't just let everyone raise their prices.  I am going to pull the plug on cable and clean my own house.  I don't want to.  I really, really don't want to.  But doing those two things alone will save me almost $6,000.00 a year.  Crazy, right?  That's what we used to call "a good chunk of change."

I will need to be less bourgeois than I have been.

Speaking of which, last night, I met up with the two gals from the factory at one of my favorite bars.  I didn't plan on staying long, but I did.  Drank a bunch of Old Fashioneds and told ridiculous tales about my time at the factory, the sort of shit that could have gotten me fired when I worked there.

I've been too much alone.