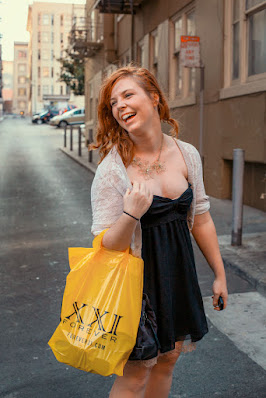 McQ6 is writing again, or rather, lamenting about not being able to write.  New job, family, vacations. . . cameras.  His life is no more interesting than mine, but whose is in the Time of Covid?  Nobody writes of their lives now without moaning and whining about all the things we moan and whine about.  Things have changed.

"You gotta walk and don't look back."

I keep telling him the best thing he can do is to buy his girl a pair of go-go boots and start making videos of the Nancy Sinatra sort, but he doesn't listen.  I'm just trying to spice my his life up a bit, but he's not having it.  I love videos of girls dancing.  Just ask him.

He had a life back "in the day."  Somewhere in his archives, he has a photo of this girl we met in the streets of San Francisco in 2012.  He asked if we could take a picture of her.  You can't see them in this photograph, but she is wearing boots.  Oh, yes. . . I had her dancing in the streets.  But she was McQ6's girl.  He tells me girls like him.  He says they think he's funny.  He made her laugh.  I got her to dance.

"There was a time when courtesy and winning ways went out of style, when it was good to be bad, when you cultivated decadence like a taste" (Boyle, "Greasy Lake").

No more of that, old sport, or you'll end up in trouble for inciting a riot.

"We were all dangerous characters then."

O.K. then.  The wreckage continues.  I will wait today for a washing machine repairman.  If you remember, my old washing machine broke down last July.  I was going to try to fix it but decided to call a repairman who charged me $85 for the house call and then told me it would be cheaper to replace the washer.  When I told him I'd watched a YouTube video on how to fix the problem, he said, "Oh, yea, it's easy. . . ."  WTF?!

So I bought a new one in the middle of the pandemic, a time when you could hardly find a washing machine to buy.  When I bought this one at Lowe's, the fellow asked me if I wanted to purchase the extended warrantee.  I never get these as I've read they are a rip-off, but the salesman said that he would if he were me. I took that to mean I bought a piece of shit washer, so I did.  Thank goodness.  The machine had a one year warrantee. I am just over that.  Had I not bought the extension, I'd be buying a new washer right now.  Rather. . . I'll wait for the repairman all the live long day.  Not really.  He'll be here between eight and twelve.  What can I do?

Tomorrow my car goes into the repair shop.  They will try to figure out why my car often will not start.  The battery is good and the starter turns fine.  I think it has to be a supply problem with air or gasoline.  I don't have a clue how to fix it except to gather a lot of money and head out early in the morning. . . .

I just hope I am not without a car for days as I was last time.

Tonight at happy hour, I am meeting up with a couple of gals from the factory.  One of them is my favorite lesbian in the world.  She grew up with cowboys in the mucklands of south Florida near Okeechobee.  She's as tough and sweet as they come.

I look forward to seeing them, but, you know, I've had to cancel mother.  I feel bad.  I've become so routinized that little fluctuations seem devastating.  But tonight will be good for me--just like the party I went to that gave me Covid.

I'll keep badgering Q about the go-go boots.  We can all hope he listens and we see photos on his blog.  Jesus, can you imagine?  There is no thrill bigger than someone else's girl.

At least that's what I think, but I'll check with my lesbian friend tonight.  I'm pretty certain, though, that I already know the answer to that one.