Another Stain Upon the Silence 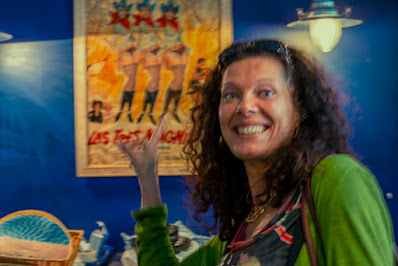 I don't even remember taking this picture, but I'm glad I did.  It has sat untouched in a folder since it was taken over a decade ago.  It was in S.F. but beyond that, I don't know WTF.  But I'm betting old DJ Memory was with me.

He's lying, by the way.  I never touched him. . . or whatever he is claiming.  He's been going through intermittent DTs since he has quit drinking.  He goes without drink just long enough to start to shiver and shake and see imaginary beasts and then gets back on the bottle.  Off and on, off and on.  Surely that way lies madness.  And it's ok.  It's entertaining.  You just can't believe a word he says.  Except the gibberish.  Therein lie his fundamental truths.

Each of us, though, is struggling with lipid accumulation.  He told me he wanted to lose a pound a day.

I mean, where do people come up with such things.  It takes somewhere around 3,500 calories to burn a pound of human fat.  Most of us burn less than 2,500 calories a day.  So. . . do the math.  I figure that if I stop drinking, I should be able to lose a pound a week, maybe four good pounds in a month.  If I really want to lose weight, I need to do the Diet Extraordinaire.  There are some good ones.  One that is fairly healthy is the old U.S. Ski Team Diet.  They came into training camp and ate 1200 calories a day the first week.  They added 300 calories a day the second week, etc.  So. . . four 300 calorie meals the first week, five the second, six the third.  You don't have to break it up like that.  It is just my schema.  I think by the end of the first month, one would probably have lost ten real pounds.

At then end of which, if one were anything like the statistical models, one would begin to gain weight.  98% of all dieters regain the weight they lost and then some.  So. . . what's the point?  I'll never be meerkat slim again.

But I encourage old McQ.  No liquor, no sugar, and lots of prayer.

Either that or hit the cocaine and hallucinogens hard.  I've heard that takes away your desire to eat and drink.  I don't know if you alternate or do them together, but I have a feeling you better not be doing coke while tripping.  Just a feeling.

Or do you?  I was never part of that scene.  I always preferred early evenings in intimate environs that served expensive drinks and lots of rich, fatty foods.  Home with a scotch by midnight.  It was money that kept my crowd Imperially Slim.  Not my hillbilly heritage, mind you, but my "adopted" crowd, the one to which I would never belong.

But how did I get onto this Mumbo Jumbo?  It is not what I came here to write this morning.  I wanted to whine more about how horrible my life has become.  I have two writing modes now--whining and complaining.  I think today I was going to complain.

C.C. just texted me something.  I wrote back that I would watch it later, that I was writing my blog entry for the day.  To which he replied:

"Another stain upon the silence.  Ciao."