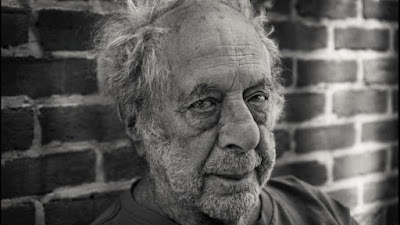 I'm not even sure where it started.  I sent some bullshit to Q telling him I had weighed myself at the gym and I didn't know how it was possible, but I had lost almost fifteen pounds.  He bit.  Of course it wasn't true.  I hadn't lost an ounce.  And I am terribly bored with abstinence.  So Q told me he was drinking early in the morning.  He was torturing me, I'm sure, but it was plausible.  He told me it made him happy to drink.  No shit?  I was looking for photos by Robert Frank at the time that were not well known.  Almost anything you see by him comes from his book, "The Americans," but there are thousands of other images from that same time.  I sent the photo above to Q.  There is no way to escape it, I said.  Nobody goes out looking the way they came in.  I think Frank is about my age there.  No, it is not true.  I still have a few years.

But, oh. . . those photographs.  It made me need to leave the house.  The day was a jewel and I was looking at photos on the internet.  I had my Pandora Kathleen Edwards station playing, and this came on.

Well now. . . there it is, the old Double Denim.  It was chilly.  I have a denim shirt I haven't worn in years.  I thought I might put it on.  I bought it with a girl I was dating for a minute seven or so years ago.  You may remember.  I had only worn it once.  What do you wear with a denim shirt?  There was only one way to go--denim jeans.  I slipped it on.  It had shrunk a bit, but it still fit.  Boom.  I was hitting the old highway.  All I needed was a pair of cowboy boots and a hat. 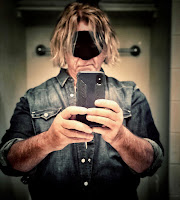 The air was sweet.  I rolled down the windows in the Xterra.  I drove slowly with the university jazz station on.

I mean, what can you do. . . Burt Bacharach on a clear, cool autumn day, cruising with the windows down?  Even schmaltz can sometimes break your heart.  O.K.  Cool jazz.  It is awful, probably, but it sounded wonderful driving through he lazy hills with the windows open.

I headed out of town. . . my town, anyway, looking for something, anything, to make me stop.

I could come back this way another day, I thought, laughing as I remembered Robert Frost poems posing the opposite.  Yes, there is never any coming back.  Way leads to way, etc.  Never the same river twice.

I felt guilty and free.

I ran to the store to get half a smoked chicken, but they did not have any.  They did have ribs.  That is what I got.

Back home, I put a log in the fire pit.  The cats showed up.  I made my dinner outside, ribs, avocado with garlic, and a glass of red wine.  I'd already fed the cat, but she has gotten to be a beggar when I eat even though she rarely likes what I give her.  I threw her a rib bone that still had tatters and tags of fat and meat. It apparently was what she has been waiting for all along.  She went at the rib.  She ate the skin, licked the fat, and then she began crunching the bones like a leopard.  She's a little wild, that one.

The fire log had been sitting in a container that was damp and so did not really ever blaze.  Rather, it did a slow, low burn that was very unimpressive.  Dark and cold were falling.  I made a quick clean up and poured a glass of whiskey.  In the distance was a barking dog.  Houselights began to glow.  Some early Christmas lights as well.  The old melancholia dropped in to say hello.  How many happy holidays, it asked?  How many unhappy ones?  There's a hard call.  I was pretty sure I could predict what this one would be, though.  It will be much like last, passing almost unnoticed but for a few sad moments.  Mr. Melancholy nodded as if in agreement.

The maids come again today.  I have messes to clean before they arrive.  These messes, the leaving about of many things on horizontal surfaces, is a hillbilly trait I realize.  Had I been trained as a child, everything would go back whence it came immediately.  There would be no lying around.  But I wasn't trained and do not know where things go.  I am as disorganized as anyone you will meet.  That is true, at least, externally.  My head is well organized.  It was trained--Kingdom, Phylum, Family, Genus, Species.  The drawers of my house are a mess.  My mental drawers, however. . . are another thing.

But I must deal with the existential world right now.  And sometime later today, things will sparkle.  They will shine.

The city put up the holiday decorations on the Boulevard this week.  I may take a stroll downtown to see,  And though I am living with marginal drinking, I may stop in someplace for a glass of wine.  To be out and about, you know, on a fine holiday eve.  Just to see if I'm alive or have become a ghost.  Just, perchance, to speak.

If, of course, the opportunity should arise.