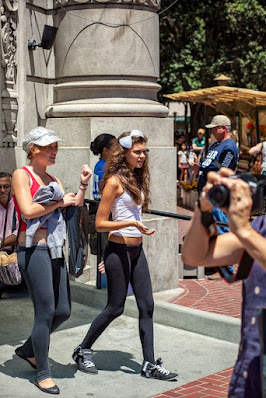 I received a lot of comments about yesterday's post. Much of it was a question of whether the city encouraged Drugs and Prostitution outside the designated zones.  Evidence would suggest "yes" as long as it doesn't bleed over into Disney.  At Universal. . . O.K.  But not Disney.

Q is at Universal.

My mother, in the meantime, has been telling all her friends that I saw a white guy sucking off a black guy behind an abandoned building.  Why she insists on doing this. . . well. . . it must be old age dementia.  But she says her friends are all delighted.  Surely they all suffer from it.

Me?  I had nightmares.

For some reason, though, everyone thinks I have photos of the event. I never said that.  I think I said something much the opposite.  But now I think I should have chanced it.  I mean, I didn't know what delight it would bring to others.

After my adventure on Sunday afternoon, though, yesterday was a letdown.  I don't even have a "highlight of the day."  Nothing.  Nada.  Bagel.  Zip.

So I turn to the news.  Omicron.  They are now naming diseases to sound like horror movies.  I think it needs a second part, though: Omicron the ____________.   Avenger?  Destroyer?  I'll leave it to you the studio audience to decide.  And I guess your choice will much depend on whether you are a liberal, a progressive, or a flat-earther.

But to tell you the truth, it seems like things are going to get much worse.  I need to understand that I will live the rest of my life in solitude.

Then there is Ghislane.  Oh, I just opined quite a bit about her and her trial here, but I deleted it.  I just think that if they are going to prosecute, they should include everyone starting with the girl's parents and then every teen who took money for sex.  But hey--I don't really think sex is a bad thing, even now in my in my forced abstinence.  Not even the guys behind the building.

But maybe Paul McCartney should be on trial.  You know, she was just seventeen. . . you know what I mean. . . and the way she looked was way beyond compare.

Sure, those are terrible lyrics.  He should be convicted of language abuse.  Comparison, Paul. . . comparison.  Fucking British hillbilly.

But. . . they gave Dylan a Nobel Prize for the likes of "Lay Lady Lay."  Fucked up a whole generation.  "Lie Lady Lie."  Get your tenses right.

Sex, though. . . you know?  It's some pretty bad shit.  Fucks you up unless its biblical.

Doesn't matter to me, really.  I'm a cuddler.  I just like lying next to my own true love.  The rest of it is just kind of funny.

Except for those taking the money.

Elizabeth Holmes new defense is that her boyfriend abused her.  Camille Paglia is right.  Men are dangerous animals.  Just look at what has taken place in the Australian Parliament.  But of course. . . Australia. . . you know?

I guess sex sells papers.  It must.  People love to read about it.  They loved watching "To Catch a Predator."  You can't go wrong selling sex.  Heck, just look at all the lascivious stories in the Bible.

I'm surprised they haven't revised the show: "To Catch a Priest."

And now that transgenderism is so popular. . . .

Whoa!  We've taken a bad turn somewhere in the road.  Let's back this shit up.

I think I'll blame this on watching "Spun" last night.  If you haven't seen it, give it a go.  Jason Schwartzman, Mickey Rourke, and a whole lot of blurred out sex organs if you watch it on Amazon Prime.  God, that must have been something shocking before Amazon censored it.  Crazy movie about crank addicts.  I watched it after reading "Everyday Was Overcast" (link), so my mind is filled with images I didn't make on Sunday afternoon.

I know outside my little hometown life is hideous.  I can feel the Drugs and Prostitution pressing in.  And I'm not kidding when I say it scares me.

So did climbing mountains and making decompression dives into deep water caves though.  Something is wrong with me, I know.

But hey--Omicron.  End Times, baby.  These are End Times.

All we can do is Duck and Cover.