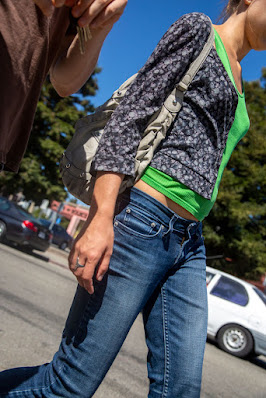 I will have to call my sponsor.  I decided that I needed to drink last night.  I don't know why, but I just felt the need.  Perhaps it is the only tangible romantic thing in my life right now.  I'll let you know what the group says after the meeting.

However many ounces I lost in the past week were wiped out in an evening.  Old CS Bannon remains as "jovial" as ever.  A romantic roundness.  Politically plump.

I imagine it is the solitariness of my evenings that is most responsible.  What?  OK, yea, I drink around others, too.  But I must imagine something.  With the setting of the sun, the taste of copper sets in.  Try it.  Put a handful of pennies in your mouth and see if you like it.  That is what I am beginning to experience with the coming of another night.

There is a big party for the factory workers tonight.  A union party.  It is not for the bosses, but I have been invited.  I won't go, however.  Somehow it seems neither right nor sane.  Surely there would be some who chaffed at the presence of one of the former "bosses."  There are always detractors.  Hell, there were even people who complained about ____________ (fill in the blank with your favorite whatever).

No, I will not go.  I will sit home with a mouth full of pennies.

Maybe I'll see if there isn't a cribbage group in my area that meets evenings.

So. . . let's look at the news.  Covid cases are on the rise.  Many mammals have been found to be infected with Covid.  The flu is beginning to hit hard, too, mostly among the unvaccinated.  There were more overdoses this year than in any year prior.  Most are from synthetic opioids.  Duh!?!?!?  Greedy doctors and greedy drug companies have pushed them over the old standard pain relievers.  But whatever.  Give drug addicts all the fentanyl they want, I say.  Their body, their choice.  Sorry, but we all choose our own poison.

Oh, sorry. . . I skipped to the editorial section.

I wrote a response to an opinion piece in the Times today.  It was authored by the president of Wesleyan College and titled "Anxiety About Wokeness Is Intellectual Weakness."  Let's reduce that title, strip away the modifiers, and look at the subject, verb, and object: "Anxiety is Weakness."  Really?  So I read the essay.  It was an opinion, alright, one without a shred of academic rigor or theoretical consistency.  So I said, and I pointed to the final paragraph as an example saying that it was better suited to a graduation speech than to an editorial in the N.Y. Times.  The anxiety about wokeness was, indeed, the author's intellectual weakness.

Then I thought about the few times I've written something on any social platform, and I deleted it.  Responding to the responses would take up the rest of my day.

Hell, I can't even opine to my friends without torturous blowback any more.  I am not the party favor I once was.  And having been chastised, without the evening liquor and/or opining. . . more pennies, please.

Jesus. . . this is beginning to sound like The Idiot's Guide to "Autumn of the Patriarch" and "One Hundred Years of Solitude."  Combined.

Why should I complain?  My mother's good, the cat is happy, my car is running. . . and there is a noodle shop nearby.  What more can a man ask for?