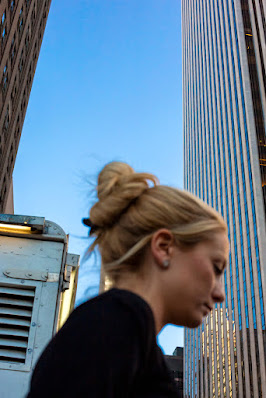 Man. . . I wrote a morose blog entry last night.  I thought I would post it this morning, but. . . I reread it.  Holy smokes.  It was pathetic, the sort of thing a man might mumble having masturbatory thoughts about an ex-lover.  No, mine was not about an ex-lover.  I was moaning about my former life.  I lamented not having a studio.  I want one, but the old one was damn near perfect.  I'll never have one like that again.

And so, having gotten takeout sushi once again and having brought it home in the failing light to eat alone on the deck, I was lamenting.

I almost went somewhere yesterday.  I put some cameras in the car.  I put the key in the ignition.  I sat there thinking.  I started the engine.

The engine idled.  I couldn't think of a single place I desired to go.  I cut the engine and went back into the house.  I felt tired.  I lay on the bed in the guest bedroom.  Two hours later, I struggled to wake up.  It was after four.

My mother had been out all day with a friend.  She was good.

I didn't go to mother's.

If I still had the studio, that is where I would have gone last night.  Damn, those Saturday nights in the studio were grand.  I'd experiment, work on alt.art things.  On a nice November evening, I'd open the doors.  Maybe another artist would be working in one of the other studios.  We shared a parking lot with a Mexican restaurant, people walking past.  Sometimes someone would stick their head in the door.  Sometimes they would come in and I would take their picture.  I would play music like this.

I was mere blocks from the best bars.  Sometimes I'd step out for a drink.  Other times, I'd just sit out back on the loading dock with a whiskey and listen to the sounds of the evening.

Yes, that sounds like the studio on an autumnal Saturday night.

I'd like some breakfast.  Maybe I'll go to one of the little diners I used to frequent.  Bacon, eggs, hash browns, toast. . . o.j.

Oh.  I got a text from my buddy correcting me on yesterday's post.  Dale, not Andrew.  "Brothers?" I asked.

I think he hinted that I was an idiot.