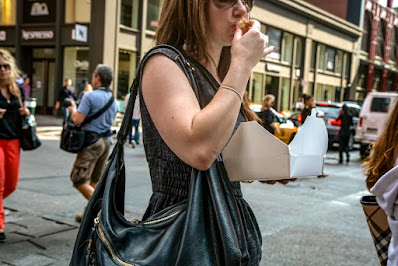 I was flying higher than a kite last night.  Mania.  Joy.  I'd rediscovered the keys to life.  It was wonderful.

What happened?  That's too big a question, too broad, too long.  I'll simply have to give you a chronological recap.  Less fascinating than an analysis, perhaps, but maybe not.  No, definitely not.  Who is titillated by analysis?  Enlightened, maybe, but not titillated.

But perhaps in my recap we will find neither.

No matter.  I had spent another usual day, accomplishing little, relishing nothing.  The big event was trying to make some big prints on the Epson.  I can't unclog two of the ten heads, black and magenta, and all research tells me that I never will.  A new print head costs between $1,200 and $2,000--if you can find one.  A new 24" printer is in the same price range.  So there is that, but a set of inks doubles the price.  My many sets of inks for my printer would be useless.  What this means is that I will probably have to give up making prints.  To make one the size I make--20"x30"--could cost upwards of $50 at a print shop.

Everything comes to an end.

Around 3:30, I called my mother.  She was not feeling well.  She did not feel like dinner and said she probably would not be good company if I came over.  I should have insisted on going over just to check on her, but I go over every single day and this felt a little like reprieve.

When I hung up, I felt a little guilty and a little confused.  I had the second half of the afternoon to myself. What would I do?  I started to curse my luck, for had I known earlier, I told myself, I would have taken a road trip.  This sounded logical, but even I had my doubts about the veracity of that.  Sitting on the deck with the feral cat, staring up at the clouds, I wondered out loud, "Pussy cat, what does one do?"  Of course I had a quick idea and acted upon it with alacrity. 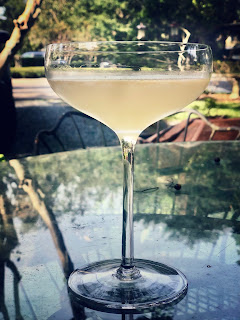 It was a bit early, but. . . .  I even remembered to use the coupe glass.  If the neighbors came by, of course, they would smile and say hello, but having passed they would say, "Isn't it a little early to be making cocktails?"  Well, sure. . . but I seem to have lost my imagination.  It might be one of the longterm effects of Covid.

As I sat on the deck, I began to wonder what I would make for dinner.  Dinner for one.  All the prep.  The cooking.  Then the cleaning.  I was beginning to think about takeout.  And then. . . right there on the deck, unused so long that it had become invisible in a sense. . . The Grill!  Jesus, what was I thinking.  My God, I could use the Grill!  How long had it been?  At least six months.  I hadn't used it since my mother broke her shoulder.  Before then?  I couldn't recall.  I'd been going to my mother's every day before then.  How long had it been that I'd had "a day off"?

It would be simple.  A steak.  Asparagus.  A few quartered small red potatoes.  Everything on the grill.

I pulled the cover off and checked to see if the grill still worked.  I shook the gas tank.  It was heavy, still full.  I turned on the burners and clicked the fire starter.  Kaboom!  I was in business.

I headed for the grocers.  I picked a ribeye that looked good.  Some fat asparagus.  Three small potatoes.  A good bottle of red.

I had everything prepared and ready.  I looked at the clock.  It was only quarter after four.  O.K. I would wait until five.  I opened the wine, got a book, sat outside with the cat.  I read a bit.  People were out for their walks now.  "Hello.  Hi there.  Yes, yes. . . beautiful."

The asparagus and potatoes went on the upper section.  I was letting the grill get good and hot so I could hear the sizzle.  "Scorch the meat briefly on each side before turning down the middle flame over which the meat sits.  Intuit the time.  If you see smoke. . . . "

A car stopped.  A voice cried out, "What are you cooking?"  It was my friend the novelist from up the street.

Apparently there are some happy to see me back at home, drinking, grilling, eating on the deck.  It gives the appearance, I guess, that life is returning to normal.

Everything plated, wine glass full, I sat down.  Kit Kat approached.  I'd already fed her twice, but she was looking at me with big, pleading eyes.  It was an unusual act on her part.  I cut a piece of good fat off the outside of the steak and put it in my mouth.  Too much salt and pepper for her and a little too hot.  I sucked and chewed it until the spices were gone and the temperature was right.  And then I tossed it to her.  She most often doesn't like the food I am eating, so she surprised me with her relish.  I prepared another piece for her before I ate.  Then I cut into the steak.  The searing had worked.  It was good and greasy.  Potatoes and asparagus firm but ready.  A big slug of red wine.  I threw my head back in delight.  Yes, yes. . . I remember now.  I remember all of this, the joy of it all.

Kit Kat and I had a hell of a meal.

It took one minute to clean up.  I lit a small cigar and poured a whiskey.  And, of course, I texted.

"A grocery store steak—not the best, but, as the hillbillies say—good enough.  And, of course there is the simple cleanup.  No kitchen mess.  Now, a blessed scotch.

I’m all greasy from steak fat and am having the day’s first scotch and am smoking a little cigar.  Wow.  I forgot these small but grand pleasures."

I smoked and drank until evening descended, alternately happy and melancholy, the two intertwining, comfortably commingling.

"The sun is gone but light remains.  Occasionally breezes shake the branches.  God, I had forgotten how much the pleasures of my own life mattered."

This morning, the whiskey bottle sits empty on the counter.  My body aches, my head is stuffy.  The mania has passed.

And now for the mundane chores of life.  I must strip the bed and wash the sheets.  I must clear the rubble that has accumulated over the past two weeks.  The wrecking crew will be here today.

Though I was happy, of course I was also chasing demons.  Sitting on the deck, I could recall a happier time.  Yea, yea, yea.  Couldn't we all.

It is another beautiful day in the 'hood.  I will take me to it after awhile.  I will stretch and walk and do some light yoga, and I will go to see a photo exhibit at a gallery downtown.  And of course, later on, I will go sit and eat with my mother.

Who knows when I'll have a chance to use the grill again.  Perhaps it is better this way.