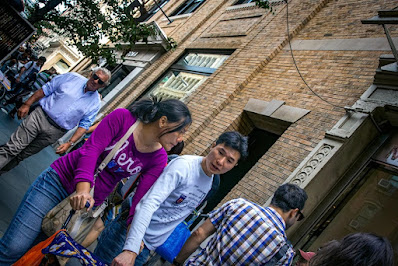 I don't know if I can write this morning.  I'm in dreadful pain.  I got up late after taking some allergy pills (my eyes have been burning, my throat itchy) but I felt fine.  I hit the coffee pot and then the pot, and while sitting there, my back began to seize up.  Now, once again, I can't sit or stand or lie down.

"How did you hurt yourself?"

"I went to the bathroom."

My eyes are watering and I am blowing my nose.  I don't think there are any good seasons now.  They all have some irritation or associated danger.

But I'll try to write something I thought about last night which will surely piss people off, though that is not my intention.  I simply wish to enlighten you.  You know. . . the way I do.  But I am having a difficult time concentrating between the pain and the blowing.  You can stop reading right here if you want.  If you go any farther, you are on a folly of your own.

There was a show I watched during the pandemic.  I watched it twice.  It was cute and silly and I needed that, but it was also shot in Paris, and without the ability to travel, it was especially nice to see the wonderful old sites.  The show was very popular and even won a Golden Globe Award, but the Woke critics didn't like it.  Maybe some French viewers disliked it, too.  Probably.  You see, it played on a lot of stereotypes and the French characters were often silly.  So this year, the show's star says, they are going to introduce more diversity.  Oooooo, that should make it good.

The thing is, the main character is a naive American cutie who is succeeding in Paris despite herself because she possesses an American Work Ethic and a Corporate Mentality.  She represents a danger to the French culture many Americans so adore.  She brings a Puritan ethic to an open minded culture.  She represents, in a very real way, the Americanization that is corrupting much of the world's cultures.

The flip side of this coin is that she is a stereotype, too.  And the fun part of the show is watching her become less "American" and more "Continental."  Oh. . . it is all silliness and stupidity.  It is like watching a Punch and Judy show.

So yea, watch again.  She is more anti-hero than hero.  There is as much pathos as comedy in the show.  That people take the show seriously to me is like trying to suggest a Life Philosophy from "I Love Lucy."  Perhaps Cancel Culture will get to Lucy sooner than later.  Ricky Ricardo needs to be corrected.

If I said, "It's not like she's from Texas," you would all know what I mean, right?  Texas, the stereotype?  You wouldn't go, "Oh, that's not fair.  There are a lot of good people in Texas."  Maybe you would.  But we would have to have Italians quit making westerns.  Obviously the French have no American or English stereotypes they enjoy.  Or German.  Etc.

They will surely ruin the show in trying to please the people who didn't enjoy it in the first place, and they will disappoint the people who did.  But you go, Woke.  Look how well things are going now that our sensibilities have been corrected.  You've given us seeds.  Now everyone can grow a garden.

But yea. . . turn art and entertainment into educational polemics.  All that will be left are posters from the Soviet era.  All shows will be training films for the masses.

O.K.  That's it.  Don't say I didn't warn you.  This is the dullard nonsense of a man suffering sciatica.  I need to move.