A Shitty End to Another Shitty Year 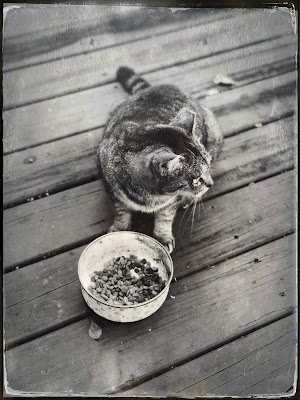 On the other hand. . . who needs a camera?  The phone apps are wonderful.  You can't do this with a camera.  And I don't think using the app is any different from using a film stock the way people used to shoot Kodachrome or Polaroid.  It's just a tool.

I haven't gotten to use a mom joke for two years.  Nice.

I was laid up with a bad belly all day.  Had to cancel my lunch date.  But yea. . . that's an appropriately shitty ending to another shitty year.

I had to go to the grocery store to get a can of chicken soup.  I thought I would need to eat something light.  And I picked up a bunch of vegetables, too.  I know I won't be wanting meat for awhile.  And while I was gazing at the vegetables, the tofu caught my eye.  Hmm.  Perhaps that would be o.k.  I bought what I needed for grilled vegetables and tofu.

Before the grocers, though, I stopped at Home Depot.  I haven't been able to figure out how to get the drill bit out of the drill.  I've tried.  I got the instruction manual online, and still I couldn't figure it out.  I wanted to ask someone, but. . . you know. . . being a sissy hippie and all. . . .  Since I was already feeling like shit, however, I decided to just take the drill into Home Depot and ask.  I walked around for awhile unable to find anyone.  I felt like a terrorist walking around with a drill in my hand.  After about fifteen minutes, I was pointed to a guy in an orange apron.  Yup.  He was my man.

He looked at me for about fifteen seconds before he said, "I don't know nothing about nothing.  What do you need?"

"I can't figure out how to get this drill bit to open."

He took the drill gun from my hand, made a couple turns and it was done.

"You have to turn these two parts."

I walked out to the car feeling embarrassed and exhilarated.

Back home, I made the soup and ate on the deck.  Then I went back to bed.  I didn't get up until four, so I called my mother and told her I would not be over.  Then I fed the cat and took this photo.  A bit later, I went inside and began cutting vegetables and tofu--a small red potato, three small organic carrots, broccoli, red and green pepper, some red onion, halved cherry tomatoes, and tofu, all lightly salted with Kosher salt and sprinkled with red pepper then dashed with olive oil.  Twenty minutes at 450 degrees.

I would put in some healthy mushrooms next time, though.

I think I am over big chunks of meat for awhile.

It will be my New Year's Eve anthem.  Apropos for me this year.

I wrote that last night.  It's a good thing.  I am a glob of mush this morning.  After my vegetable and tofu dinner, I had an aloe drink, one of those sweet, grocery store kind.  It was really delicious and my stomach was feeling better.  But illness had worn me out, I think, and by nine-thirty I was falling asleep on the couch, so I got up, made me nightly ablutions, and hit the sack.

I woke up some small time later.  Something was wrong.  It felt like I was getting bitten by mosquitoes.  My ankle itched like crazy.  Then a spot on my back.  And my scalp itched.  My legs were twitching, too.  Nerves, I thought.  So I got up and took a nerve pill, rubbed my back against a doorjamb for awhile, pulled up my shirt to look in the mirror and see if I had been bitten by a spider, saw nothing, and went back to bed.  And waited.  But nothing stopped.  The fucking nerve pill, I imagined, must be a fraud, a rip off.  Maybe I had an allergy to the aloe drink?  Something was making me itchy and twitchy.  I got up again and took a Benadryl.  That should do it, I thought.  I lay in bed and waited.  Maybe something was really wrong with my belly.  Maybe the drugs were simply sitting there, not moving through my system, not getting digested and absorbed.  It was midnight.

That is the last thing I remember until eight this morning.  The sun was up.  I rolled over with blurry eyes trying to make out the red l.e.d. numerals on my plastic 1970s radio clock.  Oh, man. . . drugs.  It was difficult to lift my head.  I lay in bed awake but not.  My mind slowly churned but my body was unresponsive.  I knew I wouldn't feel tip-top for a long, long while.

But my belly was better, I thought.  My belly seemed fine.  I am an alarmist when it comes to my health.  Every illness is the end.  A bad belly is definitely stomach cancer with horrible trips to numerous doctors, chemo and the eventual removal of my organs.  "It seems you waited to long to come in.  The cancer has spread."  I will end my life, of course, rather than suffer through this, but I don't want to.  Suddenly, as bad as life seems, it is the thing I want more of.  "I still have things I want to do," I think.  I panic as though my fate had already been decreed--hence the need for the nerve pills.  It would be embarrassing to get sick and to die before your friends.  God knows what they might say.

On going to bed last night, I had hoped to wake feeling lighter after consuming only soup and some grilled vegetables, but this morning, I am full of mud.  My exercise routine will be postponed.  I will try to use the new stripped screw extractor on the deck, I guess.  I have small hope as I have little skill and even less luck when it comes to such things.  And as satisfying as manual labor looks in those crazy hippie adventure videos I have been watching, I know what it feels like in actuality.  Days compressed to minutes in technicolor in reality are just days of tedium in my life.  But I will give it a go and hope for luck, and if those screw extractors work, I will remove some rotten boards today and then go back to Home Depot to buy a circular saw.  Perhaps I will find some spiritual satisfaction in all of it.  I've done such things before. I have rebuilt rooms and built numerous decks and have taken off an old, damaged roof and put on a new one. . . but never alone.  There has always been someone who knew what to do there with me.  "Now, with all the time in the world, I will learn the skills I have been lacking," I think.  "I am a rock.  I am an island."

Tonight the old gives way to the new.  Or so they say.  No one I know is seeing a brighter future, however. We are a people provided small gifts now, but it is O.K.  A rock feels no pain. . . and an island never cries.