A Wagging of the Tongue 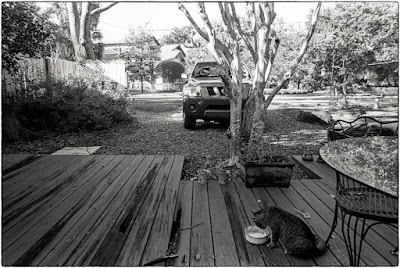 This is my rotten deck.  It is falling apart.  I found my screw gun and decided to begin dismantling it.  I figured that since we screwed the boards in, I could just back the screws out.  Well. . . no.  I thought I was in for it before, but now the shit has gotten really serious.  I think I am going to have to tear the entire deck apart and rebuild it.  First off, I don't want to, but secondly, it is going to cost a hell of a lot of money.  I could hire a deck company to do it, but I think that would cost about as much as putting on an addition to the house.  I'm truly and seriously fucked on this one.

So, yea. . . retirement keeps getting better.

I guess the good news is I found my screw gun.

My climbing buddy from California was in town for a family wedding this weekend.  I went over to see him at his parents' house last night.  I picked up a bunch of rotisserie chickens and side dishes on the way. I was starving and didn't want to wait for them to decide to eat dinner.  They plied me with beer and whiskey.  Another of his friends, someone who might claim me as a friend, too, a truly weirdo nut, came over as well with his medical marijuana.  My buddy's 91 year old father likes to smoke with him, but he has to keep it hidden from his wife who does not approve.  Being the one who lives alone and rarely speaks to anyone, I guess I kind of took the floor.  My buddy's Christian niece and her husband came over and the weirdo got them to scratch off his seemingly endless roll of lotto tickets with him.  While they were in the kitchen, I recounted abhorrent tales of drunken debauchery concerning "el raro" and "las chicas" on our various trips to Mexico.  It did not take our friend long to reach his usual nightmarish condition, and the party came to the patio where we were sitting.  But I'm good at reading the room, so the stories took on a different tone but were still concerned with the strange weirdness of life and friends.  I could see by the happy gleam in their eyes that mom and the Christians were intrigued.

I stayed longer than intended.  It's been a while since I had an audience and it was fun to practice my chops once again.  But intuitively, I knew the hour was getting late for mom and dad (and me), probably due to "el lunático's" mumbling slouch on the couch as he tried to keep one good eye open, so I said, "Well, to bring this all full circle. . . ," and I finished with an ending to a story I began with at the start of the evening the way I used to do it when I was so good in the classroom.  And with that, we all stood up but for "el sonámbulo," and the evening was done.

When I got home, it a bit past ten.  I poured a scotch and turned on the t.v.  I don't remember watching anything.  I woke at quarter 'til two and went to bed.

I woke this morning to a fog like the one in "The Hounds of the Baskervilles," the old black and white Sherlock Holmes film.  The day remains gray.  I will not do much, I guess, though I seem to have gotten over my salmonella or whatever it was.  I rather enjoyed lying in bed and reading/napping.  If the day stays gray, I may do it again.

My buddy and I talked about Mexico City.  Neither of us has been for over a decade.  He said he has been thinking about going again.  I told him I would meet him there if he does.

I didn't ask him if he was going to invite the loopy one.