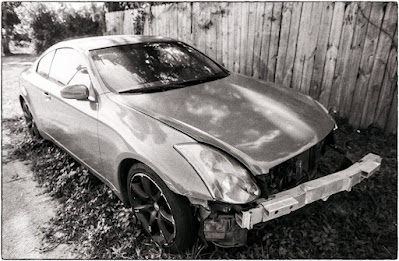 Yes, yes. . . I'm a wreck.  Hip pain as usual, though only in the morning.  But I spent the majority of yesterday in bed.  Something bad was wrong with me.  I felt strange as if all the world were far away.  It felt as though sand was running through my veins.  I ate a brief breakfast and took my cameras on a little photo walk so that I could finish up a roll of film with only a few unexposed frames left on it.  But my legs didn't work right.  My feet were clumsy and didn't go where I intended them to.  I forced myself to walk a couple miles and did manage to finish the roll (though there will be nothing good there) before returning exhausted to the car.  I drove to the grocery store and stumbled through.  O.K.  I don't always do what is best for me, but I wanted a mimosa.  Champs and o.j.  When I got home, with trembling hands, I poured the concoction into a glass and went to bed where I propped myself up and tried to finish "And Every Day Was Overcast" (link).  It wasn't long, however, before I put the book aside and let myself fall asleep.  When I woke hours later, I made another mimosa, propped myself up, and finished the book.  I was expected for dinner at my mother's house and it was already four o'clock, so I called.  Dinner would not be ready for a long while yet, so I told her I would see her around five-thirty.  I felt that would give me enough time to pull myself together.  Then I went back to sleep.  When I woke, the sun was going down.  I'd spent the majority of the day in bed.  I still felt like shit, but without showering or any other preparation, I put on some clothes and drove to my mother's.

I had missed the neighborhood association's holiday party at our lakefront lot.  It was the 100th anniversary.  I have one of the few houses left in the neighborhood from that time.  Odd, I thought.  I had wanted to go, but truly, I believed, it would have been impossible.

My mother was sitting in the rocking chair in the garage when I got there.  I sat in the one next to her.  She  talked and I grunted responses miserably.  I would rather have been in bed.  I had felt bad all day, but I think I felt worse after Q sent some photos of us together at the theme park hotel from the night I went out to visit.  I looked hideous.  I was Quasimodo.  I was the Elephant Man.  I will close my door to visitors, I thought.  Like Garbo or Lamar, I will become a recluse refusing to let anyone see my inevitable decline.  I will get a little dog that I can smother with love for company.  I won't mind meeting strangers, people I've not known previously who will not know to say, per "Prufrock," "but how his arms and legs are thin."  Indeed, I felt "I should have been a pair of ragged claws,/ scuttling across the floors of silent seas."

"Have you been reading about all those deaths from fentanyl?" my mother asked me.

I wasn't up for it, but I couldn't help myself.  "I don't think it is awful, really.  Why do you think so many people do so many drugs?"

"Those rich Hollywood people just like to party," she said.

"But why is there a drug epidemic in this country?  People are just very unhappy.  We never address the problem, we just try to cut off the drug supply.  There will always be a drug supply, though.  And people die from street drugs because they don't know what's in them.  But they want them.  They want to step away from their own truly dire existence."

I was reflecting on myself, of course.

Dinner picked me up a bit, but I didn't think it was malnutrition from which I suffered.  I suspected that I had undercooked the chicken I had for dinner the night before.  I hoped that, anyway.  I hoped I was suffering from salmonella and not from some end of life malady.  Either way, though, I was pretty certain that I would become a recluse.  I've had lots of practice these last two years.

Back home, I poured a heavy scotch and lit a cheroot.  The scotch was almost gone, but I figured I should stop drinking anyway.  I wished I knew my fairy tales better.  I was thinking of the one with the ugly old witch with an apple who could transform into a beautiful woman.  Was it Cinderella?  Who ate the apple?  I just wanted to transform.

Night had fallen and the cheroot was done, but I sat out longer listening to the holiday Sunday night sounds, thinking.  Yes, a little dog.  I am done traveling.  I like my comforts now.  I like my morning coffee and all my things nearby.  I can just watch travel videos and sit on the big leather couch with little poochy.

Which is what I did minus the pooch.  And early, though I had been in bed virtually all day, I took a full Xanax and went to bed.  I usually take half as I want my drug tolerances to be low, but I wanted to sleep the live-long night away.

And I did.  Straight through.  Those fucking pills are little miracles.  Why do people take drugs?  Oh, yes, because life is hard.

I'm hoping I am better today.  I don't know yet.  It is hard to gauge until the pain in my hip subsides.  But the coffee pot is almost empty and I need to get the garbage can to the curb, so soon I will move and find out.  Hope against hope it was due to undercooked chicken.  If not. . . I'll need to get some fentanyl.  Apparently that shit works before you know it.