Begin with a Blurry Photo 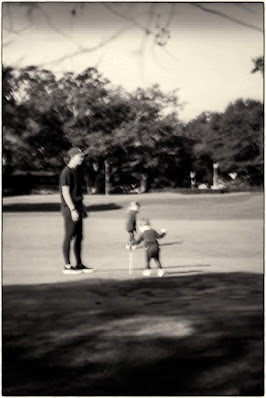 I have a "plethora" of new images I might use for today's post.  I put plethora in quotes because I don't really have that many let alone an excessive amount, but it feels good to have some choices.  Which photo I post, however, determines the post I write, where I begin, what I actually report on, etc.  Strangely enough, I have chosen the most flawed photo I have right now.  The top of the image did not scan correctly and shows some scanner marks.  The photo is blurry as I shot with a VERY slow film from the hip as I was walking by the golf course.  So why post it?  First off--people.  I never make photos with people in them any more.  I miss that.  Second, I like the impressionistic flavor of the image.  It is more like a pencil drawing than a photograph, I think.  Thirdly, it is a new film I was trying out.  I like the name of it--Babylon 13!  How could I resist?  "13" is the iso rating of the film.  For those of you who do not know much about film speeds, this is really, really, really slow.  You need either a lot of light or a lot of exposure time to make an image.  It was the movement of the camera with this long exposure time that caused the blur in this photograph.  Think of a piece of film, if you will, like a container you must fill.  You can set the opening of the faucet large and fill the container quickly or you can set it smaller and take a longer time.  The water is light.  Every photo needs the same amount of light/water to fill the container.

What?  Why am I lecturing on photo exposures?  I miss it, I guess.
Anyway (as my mother loves to say), I like the film.  It is very different from other films.  It is a movie film and has many qualities that distinguish it from still photography films.  I have four rolls left.  I will probably buy more.
Alas Babylon.
Man. . . this post would have been tremendously different if I had posted another photograph.  I could have begun by talking about lunch.  I met my travel/art buddy for lunch at noon yesterday on the Boulevard.  It could not have been a more picturesque day with blue skies and gentle light and invisible air you could not feel but for a breeze upon your cheek.  "I mean, it was more than pretty."
That is an Updike line I should be using about our waitress, a young Hispanic/LatinX girl with beautiful skin and a happy demeanor.  I should not comment on her gender, age, or skin if I use the Progressive "LatinX," I think, as it attempts to erase all of that.  But the Hispanic community is not happy with the term and feel it put upon them.  Despite Progressive Ideology, they are not won over.  Indeed, the Hispanic community is not to be defined by Progressive Ideals.  In truth, I am sure I prefer the Hispanic community to LatinX peoples.  I've traveled much in Hispanic countries, and I like the way young women respond to my saying, "Lo siento. . . yo soy viento."
"No, no. . . es tres bien."
They may stick a "papi" in there, too.  I mean, not for me, you know, but for my friends.
The restaurant, however, was a sushi place, and we sat out at a sidewalk table watching the town parade by.  I had a beer, my friend choosing wine, and we each had a sushi roll.  Indeed, that was not enough of either and we ordered again once we had finished our first course, so the afternoon rolled by with talk of travel and friends and, of course, with the pleasant company of our waitress.  Life was reasonable once more.
Afterward, it was home to nap.  Naps are glorious, especially after such good food and drink.  One feels one might live forever. 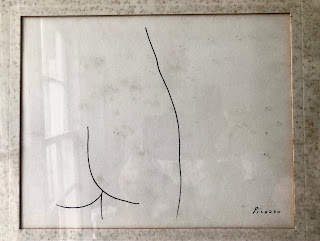 Now I shall tell on myself a bit.  My art dealer sent me this for Christmas, a framed Picasso.  What?!?!  That was my reaction, too.  Of course it could not be real, but what was it?  I looked closely.  You could see the indentation of the signature in the paper.  It was not a lithograph.  Was it a copy some artist made, a forgery or a joke?  I have been told that making line drawings like Picasso's is very, very challenging, so I imagined that this must have been by a very clever artist.  I looked closely at the signature, then Googled "Picasso's signature" and went to the image search. 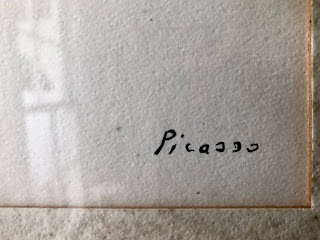 Picasso's signature varies.  In most drawings, he underlines his name, but not always.  His "P"s are often left open, but again, not always.  Sometimes his "s"s do look like backward "c"s. . . but not often.  What I found online were many lithographs of this drawing for sale, but the signature was different on those.  I was becoming convinced that this was a copy.
My art dealer let me wonder for a long time before she told me it was an etching.  So that accounted for the impressions in the paper.  Hell. . . for awhile I had almost hoped. . . .
Ha! 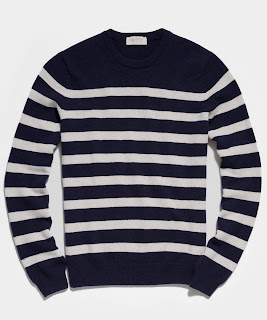 Did I mention my Japanese sailor shirt arrived?  It is not bad.  I'm not sure if I will keep it yet.  Were I a tad slimmer. . . .  But it is the type of thing you could wear without concern in NYC or SF or LA without care, but in this town. . . you really need to look like you shop at a high end mall store or that you order from L.L. Bean.  So I don't know yet.  But yesterday, I got an ad for this one.  It looks pretty cool, I think.  Who knows. . . I may have to try it too.
One last thing before I go.  I had a bank envelope full of cash.  Lots of it.  I have been paying people in cash which they appreciate if they have a business like lawn care or a maid service.  One day, I thought, "There is too much money in here to leave in the drawer.  I need to hide it."
And I did.  The other day when I wanted to give a Christmas tip to the garbagemen, I went to the drawer for the envelope.  Of course, it was not there.  I scrambled around trying to find my wallet and finally had cash in hand as I chased the garbage truck down the street.  But. . . for the life of me, I couldn't remember where I put the envelope.  And so began the search.  I checked drawers.  Nothing.  I checked the drawers again.  A house has many, many drawers.  Many.  But again, I came up empty.  Tried to remember how much cash there was.  Maybe two grand, I guessed.  I tried to be calm.  I hadn't lost it.  It was in the house somewhere.  One day, I would run across it and have a happy surprise.  Each day, however, I searched.  I checked the car.  Perhaps I had taken it with me somewhere.  Nope.  Not in the car.  I began to panic.  I would never find it.  Maybe I had thrown it away.  I checked the drawers again.
Yesterday, before going to lunch, I decided to take drawers out and empty them on the bed.  I have an old attorney's cabinet about six and a half feet tall full of drawers in which I keep art paraphernalia.  One after the other, I dumped them.  Oh. . . I found fascinating things I'd forgotten about.  Lots of them.  It was exciting.  But no envelope.
I went back to another desk that has a bunch of drawers atop it.  I dumped a small one.
Bingo!!!!
Of course half the money was gone.  You always lose more money than you find.
I told this to my friend at lunch.  He was telling me that his boys are adamant that he buy some cryptocurrency.  Neither of us understands how that is going to last, but each of us know people who are making grand sums investing in it.  I told him that maybe I should take the found money and buy some crypto.  He thought it might be a good idea.
I mean. . . I've already lost it once.  Now, though. . . how in the hell do you buy crypto?
Trust in me, friends.  As soon as I find out, I'll let you know.
Posted by cafe selavy at 7:28 AM