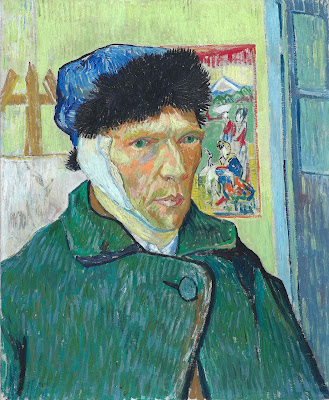 On December 23, 1888, Dutch painter Vincent van Gogh, suffering from severe depression, cuts off the lower part of his left ear with a razor while staying in Arles, France. He later documented the event in a painting titled Self-Portrait with Bandaged Ear. Today, Van Gogh is regarded as an artistic genius and his masterpieces sell for record-breaking prices; however, during his lifetime, he was a poster boy for tortured starving artists and sold only one painting.

He and Gaugin, who had been staying with him in his cramped, dank apartment, had been drinking and had quarreled.  Gaugin decided to spend the night in a hotel.  Van Gogh came for Gaugin with a razor blade but when Gaugin stood his ground, Van Gogh turned away.  When Gaugin came back to the apartment the next morning, the police were there.  Gaugin packed his bags and returned to Paris, never to see Van Gogh again.  Van Gogh reportedly gave the lobe of his hacked ear to a prostitute with whom he was enamored.  Following the incident, Van Gogh was institutionalized.

And that, I think, was the beginning of Festivus and the airing of grievances 😄.  Traditional Festivus dinner is meatloaf on a bed of lettuce.  Then comes the Airing of Grievances, the Festivus Miracle, and the Feats of Strength.

I think I'll keep my ears intact this season, but I am not finding Christmas to be the hap, happiest time of the year.  I've been roped into having Christmas dinner with my mother's neighbors, the same ones we had Thanksgiving dinner with.  I'm not happy.  I don't want to live their life or be their bitch, but such seems to be the case.  I try to look on the bright side. We don't have to cook.  But I'm having anxiety over the whole thing.

Christmas ain't what it used to be.  But what is?

I have been sitting in my house the past two days.  I've decided to eschew the gym until I get my booster shot and it has time to take effect.  I'll go back in the new year.  But when I don't get up and go to the gym, I don't do anything.  I am slothful.  I think I will continue my slothful ways for another week or so, though.  I don't want to do anything, really, just sit and look at things. 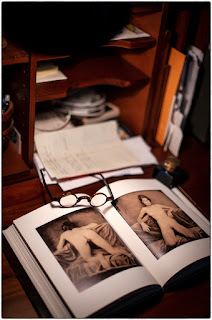 There was a knock at the door a few minutes ago.  A package arrived.  It was the $35 film camera I bought on eBay.  I opened he package and took out the camera.  It didn't work.  I had anticipated that the battery might be dead, so I ordered one on Amazon.  Nope.  I just checked.  It is still in my cart.  These batteries are difficult to find.  I will try a couple places today, but I may have to wait to see if that is the trouble with the camera.  I am frustrated.  I bought some special films to run through it.  Now. . . it will have to wait.

It is cold today.  Easy to sit inside and eat.  How do you people in the cold north do it?  I'd look like Sebastian Cabot (link) if I lived there.  Well. . . I'm kind of headed in that direction now, I guess.  Maybe Burl Ives (link).

I've been distracted by a hundred things while writing this.  My mind is an attic sale right now.  I'm going to hang up and call again later.  Love you, darling.  Until then.