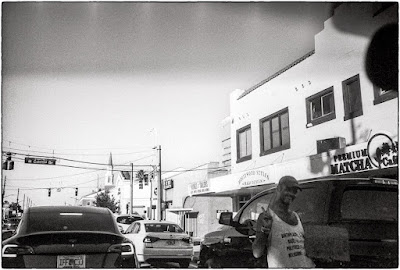 One thing about processing your own film is that you can't blame anyone when things go wrong.  I developed one roll of film in a two roll tank.  To save chemicals, I don't fill the tank up all the way.  Great. All that means is that I need to put the empty spool on top--not the one with the film.  Whatever.  You see the results here.  The top strip of film is not covered by developer the whole time, so. . . there is that dark streak.  Not just on one image but all of them.  You can tell easily in images where there is sky.  I hadn't thought this image would turn out anyway, however.  I had my camera in hand at the stoplight when this beggar walked by.  It was my Leica M, so I needed to focus and meter, but there just wasn't time, so I snapped.  I mean, heck, there was an actual human in the frame.

I wonder what film labs say when they mess up someone's film?  I've been there when they can't find a customer's order.  I like to think that the fellow took pornographic photos of his wife and the store mistakenly gave that roll to someone else.  No, no I don't.  That is just a joke.  But you see the danger there.

That's why gentlemen use Polaroids.  It is also why they invented digital cameras.  The image above would have been just fine with a point and shoot digital.  Yup.  It is hard to miss with them.

I'm a mess.  I ran around all day yesterday getting things ready for my mother's party today.  I don't know what I'm doing, but I did a lot of it.  My cousins are here for the weekend, so I visited with them, too, and last night we all went out to a terrible dinner at Outback.  Why do people eat at such places?  Whatever.  I was worn out when I left.  They wanted me to go with them to visit another relative and his family, but couldn't.  I came home to crash.

But I didn't sleep well.  Jitters and nerves.  I have to pick up the food this morning and go over and set everything up.  But, of course, the sky is cloudy and there is a chance of rain this afternoon.  Perfect.  What can I say?  I won't do this again.

And yet tomorrow is my mother's birthday.  I will need to do more.  There is always more to do, though.  Always.  How did I manage to get through life this far?  Really. . . I don't know.

It's all just dumb luck, I guess, good or bad.  Maybe in the future people will have algorithms that have life figured out, planned and charted.  If this, then that sort of scenarios.  But by and large, we're just flying in the dark.  The lucky people like to think they have done something smart, but it is not true.  One thing could have happened and everything in their life would have been different.  Send a bunch of ducks flying through a wind turbine in a storm at night.  Some will get through.  They'll think it was because they were smarter than the other ducks.

I glance up at my bookshelves.  Hemingway wrote a lot of books.  I've read them all.  But there are more words written about Hemingway than the man actually wrote himself.  Many more.  Curious to think about that, isn't it.  A lot of average writing about great writing.

Would you call Hemingway a lucky duck?