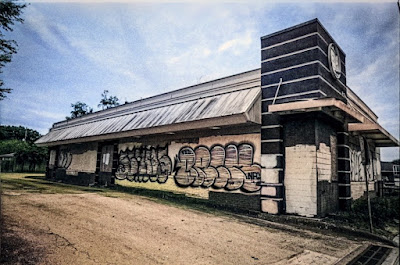 Deciding where to begin in telling a chain of events isn't always easy.  We all know that telling it chronologically is the easiest way, but it is not necessarily the best way.  Starting with the penultimate moment then jumping back to the beginning is also fairly easy, and you still finish with the denouement.  But sometimes the order of importance is not chronological, so you might narrate hierarchically.  Early in the morning after a bad night's sleep, it is bothersome to think about such things, so you just tell it however it occurs to you.

I'm flummoxed about where to begin.  I'll just start.  "It was one of those gorgeous days. . . . "  You know what I mean.  It should have been good.  But after the gym and after eating lunch and after showering, it was still early afternoon.  I have had such fun walking with film cameras, I was thinking of driving to a far away redneck bar sitting on the dry bank of a southern river of grass, a redneck place with a parking lot often full of motorcycles and pickup trucks.  It is the launching place for airboats in a narrow canal where I've watched a long, steady flow of alligators pass without seeming end, heads to tails, as they say.  It's a redneck place I've passed a thousand times on my way to the redneck beach where the sand is brown and the bars are rowdy.  In all the years, though, I've never stopped there.  I thought to take my cameras, make some pictures along the way, and see if I could rent a ride on an airboat for a bit.  Wide angle pictures of my cracker captain in front of the big wind blades that power the boat.  Etc.

That's what I thought I should do.  I'd been thinking that for days.  But I sat and thought about it and didn't move and the afternoon drifted by me.  And then, as happens, it seemed too late.  The clear air and blue sky and the perfect shadows jeered.  What the hell?  I was letting what little life I have left just dissipate in a waking coma.

And so, to palliate my dissatisfaction and my anger, I decided to do the other thing I'd been thinking about but not doing.  I would develop film.

On a perfect day, I went to the garage to mix up chemicals.  Fixer 1:4.  Developer 1:1.  But the garage has neither ice nor a microwave, so I made the trip back to the house.  Temperatures corrected, I crossed the yard back to the garage.  Hands into the changing tent, I fumbled with the developing reels.  I couldn't get the first roll onto the reel without buckling.  Back up.  Again.  Back up. Again.  Finally.  Second roll, same thing.  Anxiety sweat collecting.  Eventually, both rolls of film were in the tank.  I snapped the plastic top on and walked it to the sink for the first rinse.  Straight tap water, one minute.  Then the developer for ten.  Then a wash for two.  Fix for five.  Hypo clear for two.  All of this with intermittent agitation, me standing at the sink staring into the block wall.  Then the final wash--ten minutes.  I walked the film back to the house in its canister where I made a final rinse with purified water, pulled the film off the spools, squeegeed them, and hung them up to dry.  There were images.  Everything had worked.

I had another roll of film of a different type with different times and concentrations.  Back to the garage.  Mix the chemicals.  Cross back to the house.  Into the changing tent.  Etc.

When this third roll of film was finished, it was time to go to my mother's.  I had successfully fucked away a perfect day.  Did I mention it was perfect?

My mother said she had a pork tenderloin she would fix for dinner.  I needed a beer.  In the perfect light in the late afternoon of a perfect day, I drove to my mother's where we sat in the open garage once again drinking beer and chatting with the passing neighbors.  They all like drinking now, even the ones who didn't before.  That has been my contribution to the neighborhood.  It has made my mother a very popular member of the group.

When the last people had gone and the last drop of beer was drunk, we went in to make dinner.  Dusk had fallen.

"Well now, I think that if. . . . "  You know. . . specialist who contribute.  When time came, I switched over to the BBC.  They just deliver news from around the world without so much opining.

We sat down to dinner.  First the salad, then the meal.

The first bite of the pork loin made me gag.

My mother agreed, but she had eaten most of her small piece already.

"Something's wrong with this."

"It doesn't taste right, does it?"

"No. . . how'd you eat that?"  But I knew.  Hillbillies will eat anything whether it tastes good or not.  They may not like it, but they aren't just going to throw food away.

"I think I'm going to get sick," I said.  Indeed, I have an active imagination when it comes to food.  I was already belching.  "Where did you buy that?"

"I've told you NOT to buy meat from Aldis.  Jesus, for all I know you bought this at a third world camel market just to save a couple pennies."  I was livid.  I finished off my rice and broccoli and said I had to go.  "I need whiskey," I said.

My mother felt very bad, of course.  I tried to laugh it off between belches to make her feel better.

Back home, I poured a mighty one.  That seemed to end the belching.

"You're such a fucking head case," I thought.  "You should call your mother and apologize."

But I didn't.  I poured another whiskey and decided to start cutting the dried negatives.  I put on my iTunes station and got to work.  And when they were all cut, I hooked up the Epson scanner.  I was anxious to see what I had.

100 frames, approximately, and not a person in any of them.  I've become the worst photographer in town. Frame after boring frame of buildings and signs shot wide at weird angles trying to make something of interest.  Black and white and boring.  I was scanning them quickly on the flatbed to see them, and the scans were muddy and unsharp.  I put them in the holder, punched the button, then sat back watching the computer screen and listening to the music mixing with the scanner's hum.  For hours.

Failure on all counts.  Looking through the strips of proofs, I picked a few to scan large, but they turned out badly.  You can't really scan 35mm negatives on a flatbed and get good results.  I took them into Photoshop and tried to make something of them.  I pulled ever trick I know trying to make the boring, poorly scanned images interesting.

I looked at the digital clock on the computer.  I'd wasted the day.  It had been a beautiful one.  Had I mentioned that?

That sums up my life in short.  I may be done with film, or at least with processing and scanning it myself.  I don't know.  My skills are gone.  It's probably a result of Covid.

Still, you know. . . there was the music and the whiskey.  Oh. . . my iTunes station is getting better all the time.  New music I like but have never heard before.  If nothing else, there is the music.

Oh, yes. . . the image above is the abandoned building where I went to pee and saw the cocksucker and his boyfriend.  Maybe I'm just bitter.  I mean, that's more sex than I have had in a very long time.

Oh. . . this is where the tale should have begun.  I slept poorly last night, waking again and again gasping for breath.  Apnea.  By all accounts, it is killing me.  Up and down, glaring at the clock.  I gave up as the first light broke the horizon shortly before sunrise.  As is my habit, I walked to the kitchen and hit the button on the coffee maker.  It just beeped.  I hadn't set it up before going to bed.  I cleaned it, poured the water, poured he beans.  It seemed like an omen for another perfect day.