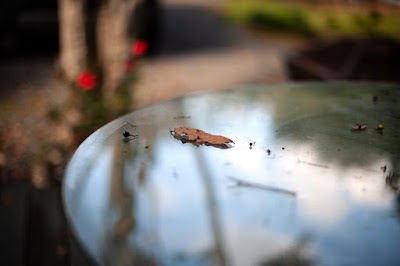 Yesterday, as previously recorded, I woke up feeling like Fido's ass.  Covid or egg nog?  While I was deciding, my mother stopped by on her way home from church.  It was a big surprise as she has not been here for two years.  Since I go to her house every day, there has been no need.  It was after eleven and I was still sitting around disheveled and slow.  She shook her head as she stepped up on the deck.

She came in and we sat for awhile.

"Nothing has changed.  I'll bet some of this stuff is in the exact same place as it was the last time you were here.  Well. . . those plants on the mantle are new."

Of course we have nothing fresh to talk about.  I asked about church.  The air was out, she said.  Oh.

When she was gone, it was almost noon.  I needed food and an eggs Benedict on a croissant sounded just right.  But the little French bakery is just off the Boulevard and it was a holiday Sunday.  I worry a lot about stupid stuff.  It would be crowded.  I wouldn't be able to find a place to park.  All the outside tables would be taken.

None of that was true.  I drove up, found a place to park, ordered, and sat outside on the sidewalk.  And holy smokes did that croissant Benedict taste good.  I began to feel much better.

Q and I have been considering which of us is wealthy and stupid enough to spend ten grand on camera gear.  A new Hasselblad 907x is my desire.  He vacillates.  But recently, I saw a photograph taken with the Leica Noctilux f/.9 lens.  It is the most beautiful photo I have ever seen.  The lens--$12,000.  Q and I spoke of lenses.  He likes his Nikon 50mm f/1.2.  Yes, it is a nice lens.  I started wondering if I had one.  I got out my Nikon gear.  I have stuff I don't even remember.  I pulled out my old Nikon D700, the earliest of my digital SLRs.  I loved that camera.  I was able to use all my old Nikon lenses on it.  Then, in the big auto break-in/heist of 2015, my Nikon film cameras and many lenses were stolen (along with a ton of Leicas and more).  I am sure I had that f/1.2 stolen.  What I had on the D700 yesterday, however, was an autofocus f/1.4.  Bored yet?  Yes, this is geek talk.  So just let me say all of this is about being able to separate your subject from its surroundings.  That is why I want the Hassie 907x.

Even though the Nikon is only a 12 megapixel camera, it is big and thick and heavy.  But I thought it might be fun, so I got the charger and charged the battery while I was at the bakery.  In the afternoon, I played with the camera. 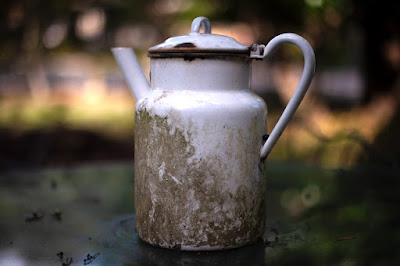 Bet you've never seen this one before!  Ha.  But look at that.  I'd forgotten how much I loved the color rendering of this camera, cooler and a little richer in the greens and blues than the Canons and Leicas.  And the reds really pop.  It was like having a new camera.  Indeed, I hadn't used it since early in 2018 according to the embedded profile information.  When I downloaded the photos, there were some surprises. 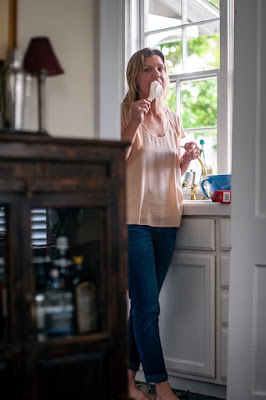 Oops.  Well. . . I'm, not the kind to forego or forget my past.  But I have to say. . . there was a pang of holiday. . . whatever.  There is something magical, though, about not seeing the photographs you've taken for years.  Or maybe only surprising. 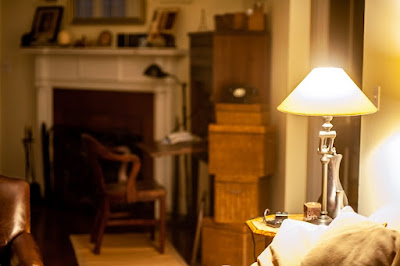 This was in there, too.  See?  No plants upon the mantle of the fireplace.  Indeed, the mantle decor has been totally redone.  Old photographs just bring something inexplicable back to you.  The warmth of the old hearth and home, I guess.
Like having a hot meal!
Back to geek talk, though (and one of the main images in "Nightmare Alley" is The Geek).  This f/1.4 lens does a nice job of blurring the background.  It is smooth and sweet.  Still. . . I have such desires. 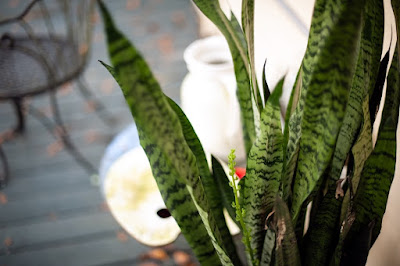 I don't know.  I don't.  Why do I need another lens?  I don't think I do.  I don't.  And yet. . . think of the photos I could take of my table and deck and the old water can if I only had another lens, one that was just a tad faster wide open.  Imagine!
The Buddha was right, of course.  Desire and suffering are inextricably linked.  There is no end to wanting in my near future, I'm afraid.  Not until I've been cleansed.  But I will try using this camera again for awhile until I see another shiny object on the horizon.
Tomorrow is the shortest day of the year.  Only 21 hours.  O.K.  It is the longest night of the year.  It is also the first day of winter.  And Christmas is upon us.  It brings me anxiety and sadness, I'm afraid.
But. . . maybe a shiny object would help me get over it.  Maybe. . . .
Posted by cafe selavy at 9:16 AM