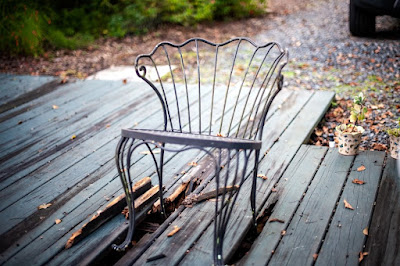 There was a little party for my friend from the factory who got a job in another state.  She is back here for the holidays to see family.  So yesterday at four, there was a little get together up in Grit City.  I had planned to go.  But all day I was feeling rather blue.  Dark blue.  Tragic blue.  Still, I thought, a get together just might pick me up.  I could take my cameras up early and make some pictures before I met the group.  But I didn't.  And then, after showering and getting dressed, just as I was about to head out the door, it began to rain.  It had been cloudy all day, as the song doesn't quite go, which probably contributed to my purplish feelings, but it hadn't rained until I was ready to get into my car.  As with everything in my life, there are always mitigating conditions, and in this case it was that my windshield wipers were not working.  They move, but they don't do anything.  About six months ago, if you remember, the driver's side wiper flew off.  I put it back on, but it was bent so that the wiper doesn't touch the windshield where my eyes look out.  I keep meaning to get new ones, of course, but since I don't drive more than a couple miles a day. . . well, it hasn't been a priority.

The other consideration was that I did not want to sit inside a bar, and I knew we wouldn't be sitting outside if it were raining.  Tough decision.  I wrote my friends and told them I wouldn't make it.  No one wrote back for quite awhile.  The rain was light, but still, one could not sit outside in it.  I decided I would go to my mother's house to have a beer with her.  Just as I was about to leave, I got a text.  No one was at the bar yet but my friend.  She said that the patio was under cover.  Damn.  I was tempted to go.  But no one else was there and it would take me at least forty-five minutes to get there and that at the minimum.  If I had gone earlier. . . . I was tempted, but being in the dumps and all, I decided not to go.

Texts began coming in.  I wasn't the only one.  Many of the group were not going to make it.

I got into my car and drove to my mother's.

We sat out and had a beer.  She was leaving in a bit with some neighbors to drive around and look at Christmas lights and decorations and then they were all going in to have some hot cocoa.  My mother's social life has really picked up.  The night before she had gone with the same group of neighbors to a holiday part at one of the member's church.

When I got back into my car to go home, there was a photo of the Grit City group sitting on the patio surrounded by Christmas lights and the blue dusk.  The group wasn't large, but it was appealing.  Selavy.

I came home to eat a bad, cold dinner alone.  A cheroot and a after dinner drink and then another night of watching YouTube videos.  The purplish blue went black.

The morning is full of rain as a front moves through.  It will be another moody day.  Many friends have gone north (god knows why) for the holidays.  Texts and emails have quieted.  I have not put up a single holiday decoration, but yesterday, after ignoring it for a week, I looked at my mail.  There were Christmas cards that now line the mantle as a lonely reminder.  I can see the neighborhood Christmas lights through my windows.  I haven't bought a single present, haven't watched a holiday show.

Last night, I had many dreams.  Most were surprisingly pleasant.  I woke unconsciously telling myself I would do "better."  I'm not sure what I meant,  nor, indeed, what the dreams were about nor what really happened in them.  I just remember smiling.

But I guess I can go with that.  Truly, there's nothing like doing better, and right now, that isn't a very long journey.

Oh, shoot. . . I forgot to mention that it is winter and this is the darkest day.  I should have led with that, of course.  It would have worked to enhance the atmosphere and all.  What can I say?  The Solstice is upon us.