The Godot of It All 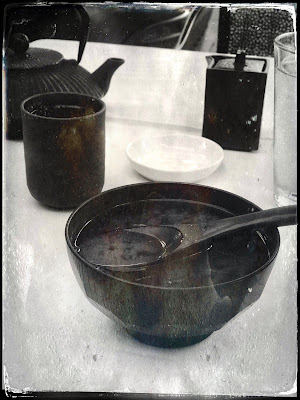 "Life is weird it's own self."

Who said that?  I don't think anyone did, actually, but it seems as if.  It seems like a cross between Barry Gifford and Larry McMurtry.  An amalgam, if you will.

Given that (?), it sure seems hard to wiggle your way into heaven.

I've been drinking bad coffee the past few days.  My mother bought me four pounds of Starbucks coffee from Costco for Christmas.  I loaded up the coffee jar with one of the packages at the beginning of the week.  I was thinking I had Omicron because my tastebuds were way off.  The coffee tasted like butt.  I suffered through it, though, thinking it was me, but I realized that it was only the coffee that tasted bad.  I took the top off the coffee jar, stuck my nose in, and inhaled deeply.  Oh, brother. . . it didn't smell like coffee!  Maybe my smell had gone with my ability to taste.

Last night, I bought some new coffee and loaded up the coffee pot.  It smelled like coffee.  I couldn't wait for a cup this morning.  When I got out of bed, first thing, I started the big Cuisinart that grinds and brews then went for my morning ablutions.  When I came back to get my first cup, the coffee pot was only half full.  WTF?  I have a bad plug, and apparently the pot's prongs had come loose halfway through the brewing process.  I tried plugging it back in, but the coffee pot didn't like it.  It just flashed its lights and beeped and beeped and beeped.

I'm drinking a half pot of very strong coffee.  The good news is that my taste buds are fine.

I ran the dishwasher last night just before bed.  When I went to get a clean coffee cup from it this morning, however, I saw that it's lights were blinking, too.  The door was a bit ajar.  The dishwashing cycle was incomplete.

My morning has not started the way I had hoped.  I so want to enjoy the simplest of pleasures, but. . . .

Still, it beats the start to yesterday when, stepping out to feed the waiting cat, one of the rotten deck boards broke underfoot.  I was mere millimeters from breaking my ankle as I fell, foot trapped between the two adjacent planks.  Were it not for my innate athleticism. . . .  I was able to twist my body and bend my knee just right as I fell.  Only scrapes and bruises.

I am going to have to get a crowbar and begin ripping it up next week.  What I do after that, I don't know.

As reported, I've been in a funk.  I try to do things to keep my mind occupied, but I am moving adagio, and the days slip away from me.  I didn't exercise and take my walk until very late in the day.  Which day?  I didn't know.  But coming back by way of the Boulevard, I realized it was Friday.  Friday?  People were already out having fun.  I wanted some fun, too, I thought, so when I got home at four, I called my mother and told her I would not be over.

"It's sushi Friday," I exclaimed.

I took a shower and was seated at a sidewalk cafe table for one by five.  It was fine.  I wanted to believe it was better than takeout, but in truth, only the scenery was different.  I was still eating in silence, alone.  There were distractions.  Oh, god, there were lovely distractions, but they only made me feel like a guy eating at a sidewalk table by himself.

I had plenty of time to ruminate.

The weather is lovely, the light spectacular.  I should go somewhere.  I really should.  Just a day out, photography and all.  I tell myself I will, but I find a hundred reasons to hold me back.  Still. . . I may go.  I just might.