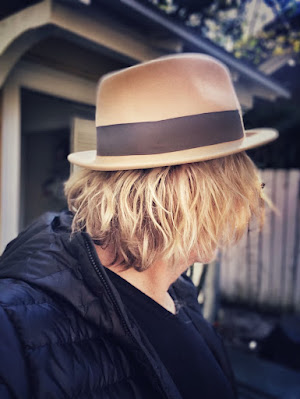 “The clothes make the man, or so the saying goes.  But all you have to do is look at a row of fedoras to know what a bunch of baloney that is.  Gather together a group of men of every gradation—from the powerhouse to the putz—have them toss their fedoras in a pile, and you’ll spend a lifetime trying to figure out whose was whose.  Because it is the man who makes the fedora, not versa vice.  I mean, wouldn’t you rather wear the hat worn boy Frank Sinatra than the one worn by Sergeant Joe Friday?  I should hope so.”  (Amor Towles, “The Lincoln Highway”)

Funny to read this last night now that I have not one but two fedoras.  I think they are fedoras.  I just looked it up.  They are definitely fedoras.  My Famous Fashion Friend did not give it a "thumbs down," and challenged me to wear the damn thing and make it work.  They work alright, around the house, anyway.

Hearing from my old friend again after all these many years has been wonderful, but it has been challenging, too.  I didn't want to, but I felt the need to send some recent photographs--contemporaneous, really--so she might know who she's dealing with.  Doing so, however, brought me face to face with the ravages of the years.  You can fool yourself quite a bit, seeing yourself in the mirror every day as you do.  With quick, perfunctory glances, you tell yourself you are looking swell.  In truth, though, we don't see ourselves as we are, do we?  Rather, our gaze falls on some smokey idealized version of that aging monster in hopes of fooling ourselves that everything is truly fine.

Now, however, I am forced to wrestle the with that monster, and I'm finding out its strength.  There is no beating it.  I just have to learn to live with defeat.  We all suffer defeats on an almost daily basis, but somehow this one is more profound.

These correspondences have, however, given me a sense of urgency about "things."  Hopes, dreams, and desires.  I feel a sudden need to be more productive.  The hours of the day must be utilized more fully.  "More" is easy at this point.  I've done so little with them in the Time of Covid, any effort at all would double my output.

I just went in search of proverbs about aging.  God. . . they are ridiculous.  Worse, however, were the proverbs about women.  Proverbs, friends, are as useful as a t.v. commercial.  Avoid them lest they consume ye.

"It was a time of adventure and daring, before the masses felt comfortable enough to travel, before the Walmarts and Kmarts and condo developers had blighted the land."

That's as far as I've gotten with my Brando vignette.  So much for utilizing the hours.  It was a usual day of exercising, visiting my mother, making dinner, and, for the second week in a row, watching football.  I DVRed the games so I could fast forward through all the commercials, but the two games, even in warp speed, took up much of the evening.  They were once again exciting games, but they were not nearly as rewarding as a good book.

Life is full of options.

I've reached the end of Dry January.  I did it without much trouble.  I don't think I am a full-blown alcoholic and don't want my 30 day coin or whatever AA gives their people as a carrot.  But it's time to measure and weigh the benefits.  I may have lost a pound or two, but I definitely don't feel like Slenderella.  I may make a trip to the doctor's office to get weighed on the same scale as I did last time, and if I've continued to lose ounces, I may see what a Dry February is like.  If not, however, I may put an end to this madness.  I need pleasure.  I need fun.  Yesterday, in a desperate effort to engage my senses, I decided to make an egg sandwich.  I wished for bacon, of course, but eggs and cheese on toast with mayonnaise would suffice.  When I went looking for the cheese, however, I found an old piece of pancetta in the meat locker.  It was old, but there was no growth on it.  I smelled it.  It seemed to be fine.  So I threw it in the pan and slowly fried it through and through.  And Sweet Jesus, that egg sandwich was delicious!  Both I and the kitchen, however, were smothered in grease and oil and yolk and mayonnaise when I was done.  A lot of heart-clogging calories there, but such was my desperate attempt to find pleasure.

The Hog of the Forsaken, my friends, makes for a good sandwich.  Let it be told.

The morning is bright and the air is frigid.  I must make myself productive.