Your Answer Could Be Revealing 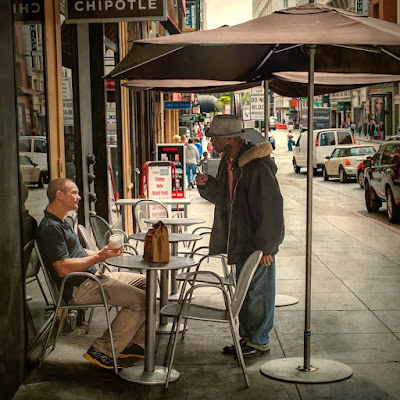 This is a sort of psychological test.  Not Rorschach, the one with all the dirty pictures, but a social one.  What do you see?  Be careful.  Your answer could be revealing.

I didn't sleep well again last night, even taking a knockout pill.  The cat has not come around for three feedings.  I wonder what it all means?  Be careful.  Your answer could be revealing.

As previously reported, I was asked to shoot some video today.  I didn't want to, but I said I would.  Last night, I got off the hook.  The famous feminist filmmaker couldn't make it. Whew.  Now I can do what I had planned to do instead.

I've become the King of Nothing.

Something has either died beneath my bedroom floor or another stinky ass possum has taken up residence.  Or it could be the same one.  I will have to do something.  It is terrible.  What do you think?  Be careful. . . .

Remember I told you about all the girls who started writing me?  They've stopped.  My charming personality and creative inventiveness might have sparkled a little too brightly for them.  Or maybe they simply remembered why they quit communicating in the first place.

Or maybe they have lives.

I've had one before.  They are nice things, but they do take up a lot of your time.  My friends with children seem to have very little.  Time that is.  They are what e.e. cummings called "busy folk. . . someones and everyones."

Bohemians.  I really like Bohemians.  There are basically two types of people in the world--Bohemians and everyone else.  I think Bohemians can only exist as long as there are many more everyone elses.  You need everyones to do the everyday work so that Bohemians can enjoy the fruits.  The world wouldn't work if the ratio was reversed.  A world ruled by Bohemians. . . Jesus, we would all be scavenging for nuts and berries.  But in the everyone/everyday world, the old workaday world, there is enough left over for Bohemians to pilfer and get by.  In spite of appearances, though, the world needs Bohemians.  They are the creatives.  Noam Chomsky is fine, but he doesn't make you laugh.  He'll never write an interesting novel or screenplay.  Bohemians are the civilized west's desert.  But you can't live on deserts alone though.  Nope.  Those everyones keep the world a-chugging.

Now. . . for a political comment.  Old Shakey stepped in it, it seems, with his comment on Russia and the Ukraine.  A little invasion will be just a little bad, like maybe getting to second base on an adolescent date.  I don't understand, though, what people think they want.  A war with Russia?  Americans don't have the stomach for war any longer.  You have to be willing to demonize the "other" to kill them, and when you start, you must kill them all, the mothers and children and grandparents and pets.  Otherwise it's called "Afghanistan."  And you know how that turned out.  To win a war, you must be willing to put heads on stakes.  Americans just want to play computer games.  "You know. . . there are good people in Russia.  We only want to get rid of the bad ones."  It doesn't work that way.  So what do people want Biden to say?  That we will use every weapon in our arsenal to defeat them?  I don't think so.  Kids want to go to climbing gyms and make TikTok videos.  They want to cry "Victim."  They are fragile.  Unless you want to send a bunch of Kyle Rittenhouses to the Ukraine. . . .

Quickly. . . tell me what you think.  But be careful.  Your answer could be revealing.