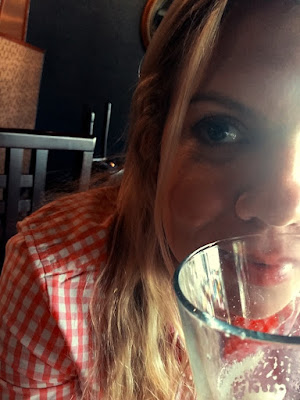 Maybe it's the mania, but I can't sleep.  I tossed and turned all night until I could stand it no more.  I got up before five.  Now I've read the news and have drunk the coffee.  It is six.  What's a fellow to do?

Perhaps it's too much computer time.  Again yesterday, I didn't leave the house.  I just worked with photo software and listened to music.  The passage of time is curiously warped whenever I'm engaged with  that, hours passing with me unawares.  But staring at a computer screen for hours is a sure way to wreck your health.  It is one of the reasons kids don't sleep.  I've suggested to Q that he wear those glasses that block blue light, but I don't think he has gotten any (link).

I spoke with Q last night.  Since he has shut down his blog, you are not able to keep up with what is going on in his life, so I will fill you in.  He, too, is doing Dry January, and he, too, has failed to lose any weight.  He said he'd lost four pounds, but he planned on eating a hot dog at the movie theater he was headed to, so I know he will put that back on by morning.  Burning up excess fat is ridiculously difficult.  The body doesn't want to give it up.  Put a pound of animal fat on a plate and set it before you.  That's a lot of goddamned fat.  Quadruple that.  Try to imagine twenty pounds of fat.  How long does it take to burn that off?  That's 70,000 calories.  How long must you stay in a deficit to burn off 70,000 calories?

He and I each may have lost some ounces, but the majority of the four pounds is water.  Four pounds is 14,000 calories.  In three weeks?  No way.

And studies all indicate that people who lose weight through dieting put the weight plus more back on eventually.  You can diet to get ready for a wedding or a fight, but that is coming back.  I've probably put on two pounds a year for the last ten years.  I think I might be able to lose that in the next ten and keep it off.

Q said he liked me calling myself Quasimodo after seeing a photograph he sent me from our visit at his favorite theme park.  He was still laughing when he said it. The fat really goes to two places on the body--the belly and the face.

But that's enough about me.  Let's talk about Q.  Now that he hasn't a blog, I can punch down.  What can he do?  Yell?  Talk bad about me to his friends?  He sits in the happy lap of familial bliss while I suffer through years of solitude and loneliness.  The gods are cruel.  I have only this blog to even the score.

But I'm not the type.  Don't make enemies unless you are willing to kill them.  Otherwise you are only making trouble for yourself.  Political Science 101.

I took today's photo with an iPhone.  I've not done that very much, but damn, those things are impressive.  Now that I've made a large print of an iPhone image, I may use it for more than the mirror selfies I send to friends.  Take one hundred, choose one.

I've begun posting song lyrics with the music I post on Radio Selavy.  But more updates on that to come.  With a few exceptions, I'm trying to post music you probably haven't heard before, hence. . . the lyrics.