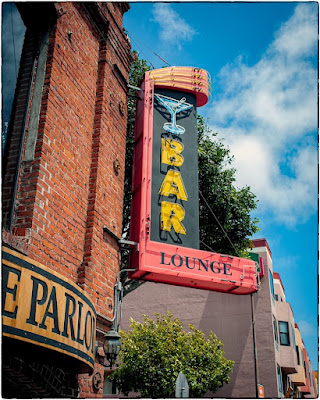 I won't be able to write much today.  Everyone is up and the t.v. is on.  My head is snotty and I can barely think.  They ask me a question every few keystrokes.  The weather is shitty, cloudy and cold, and so they've decided to head back home today.  I guess I am, too.

The good news is that I got out of the house, and I will again.  I went out yesterday with camera, but the light was not good at all.  The shots will be dull and flat.  Selavy.

Aieeeee!  They narrate every move they make!

I went to an island I'd never been to before.  I parked at the far end of the island next to a long pier built in the early 20th century to allow steamships full of potential buyers to come and look at the real estate.  Across the street was an understated restaurant.  I hadn't eaten and wanted to get a fish sandwich and a beer.  There was about a ten minute wait, so I put my name on the list to get a $25 sandwich and a $10 beer.  Man, I thought, those must be good.  A couple came in behind me and asked if there was a bar where they could wait.  There was, and I followed them in.  Oh, my, it was the best bar I've ever seen, small and beautiful.  But everyone had apparently just had a seat and had not yet received the food they ordered, I guessed, because they had napkins spread on the bar before them.  God, I wanted to eat at that bar.  I wanted to take a woman to the bar to show off.  But my table was ready.  I declined.  After seeing that bar, I was not going to sit at a table alone.

But now, I need to pack.  Not much of a trip, but it was something.  I'll tell you about it sometime.