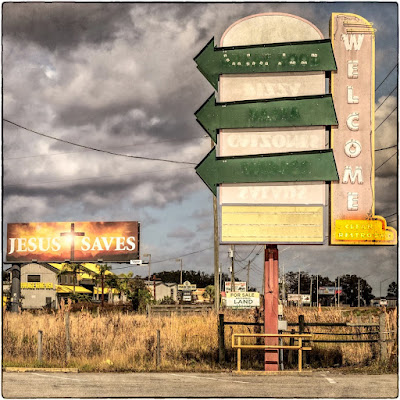 "Ennui rises suddenly on a Monday"
That's a line from "The French Dispatch."  It is an ironic line and fooled me when I first read it.
"Read it?  I thought you said it was from the movie?"
"Here--read this."  He hands the fellow a link (link).  The fellow reads:

What sounds will punctuate the night?

And what mysteries will they foretell?

I travelled through the belly of the state.  I spent enough hours driving to have flown to Paris.  I took many cameras, but I used only one, the big bazooka of a Canon DSLR with the 24-105mm zoom lens.  It was a good choice.
Still. . . the photographs are listless.
As I've reported, the old towns in my own home state are being converted into developments for retirees who want to live with the usual coterie of discount stores, cheap chain restaurants, humongous Wawas, and no snow.  The industry that serves them drives the local economy.  Small banks, investment firms, auto dealers, repair shops, etc.  One place looks like another.  Thee is a script that developers use with local boards that extols the benefits that their projects will bring.  It is an old saw used over and over again until finally the state becomes one giant shared experience, highways full of lighted plastic signs, old buildings replaced by open shopping plazas full of yoga studios and nail shops across the street from Walmarts and Targets on out-parcels of land.
One can (and does) sneer, of course, especially if one reads biographies of great adventurers and assumes something of the persona without really adventuring oneself.  Take the great Sir Richard Burton, for instance.  There are few whose adventures can compete with his own.  Read "The Devil Drives," a biography by Fawn Brodie.  Hell, such things drove me to my own much milder experiences on mountains and in jungles and at sea, anything to elevate me above the common experiences of middle class America.
The condominium on the beach where I stayed was an enormous development, one of a hundred. . . a thousand. . . such developments along the coast.  Where once the occasional mom and pop motel provided lodging for those who wished for a relaxing week away from the crowds in a semi-tropical exotic location surrounded by palms and dunes full of sea birds and sand crabs, there is now barely room to park.  Those broad, shell-filled, white sandy beaches are now filled as far as the eye can see with The Golden Horde.  Thousands.  Tens of thousands.  Millions.
It is terrible.
And yet. . . people are people, and talking to them can be charming.
"Ted and I used to travel a lot.  We've been to almost every continent, haven't we, Teddy?  But we are getting older now, and we love it here.  We eat and drink and have friends, and we love our shows.  It really suits us now."
And we love our shows.  There is something sanguine and sweet in such a statement, the safe and shared experience there in what might as well be called Boca del Vista.  And as he got older, even Burton became tied to the apron strings of his wife, Isabelle, engaging in his own form of marital comfort.
By the time I got there, the weather had turned.  From the tenth floor where we stayed, it became nearly impossible to distinguish the sand from the sea and the sky.  Everything was a misty, muted gray.
The temperature dropped, and then there was rain.
I spent a dull day driving around, stopping, and photographing, but there is little to nothing as a result.  Perhaps some travel illustrations, but nothing of repute.
I got back to the condo late.  We decided to order pizza, but the pizza joints weren't answering their phones.  I assumed that most of the island's million residents had the same idea.  So I looked through the refrigerator and pantry.  Eggs.  Spam.  Tortillas.
Yup.
At least my cousin had turned the seventy inch t.v. to a cooking show.
The television only went off at bedtime.
On Sunday morning, the forecast called for much the same weather the rest of the week.  The party was over.  I drove home in the misty rain with one good windshield wiper, but that is another story.
When I got home, all I wanted was a shower and a nap.  When I got up, it was late afternoon.  I hadn't eaten since my Spam and egg burrito the night before, but I wasn't hungry.  What I wanted was a drink.  Not a whiskey, though.  I looked through the library.  There was enough tequila and Cointreau for one margarita.  I had a bottle of gourmet lime juice in the fridge. 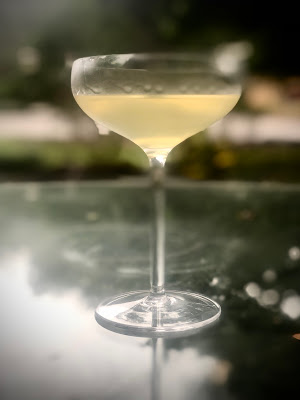 I thought it would knock me on my ass, but I barely felt a thing.  Indeed, I wanted another.  I made a run to the liquor store, and on the way back stopped to get something for dinner.  It would be a quick meal--arugula with split cherry tomatoes, garlic, shaved parmesan, olive oil and balsamic vinegar followed by a mixture of canned tuna and Amy's macaroni and cheese.  But first, a second drink.
I put on "The French Dispatch" and settled in for the night.  I wasn't tired, but I was worn out. . . as they say.
"We love our shows," came to me.  Yes, I thought, that might be nice.
Posted by cafe selavy at 8:25 AM