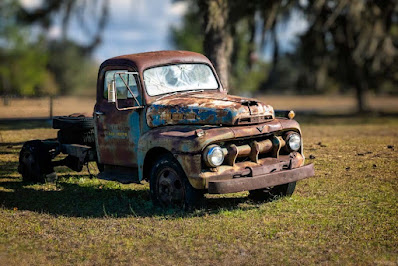 Driving through the country, you can find the occasional old showpiece here and there, an old barn or a truck set out as if for display.  If you have a mind, you might stop the car and make an illustrative photo of the thing.  It won't mean much, of course, to you or anyone you know, but it is, in the outer reaches of the imagination, a symbol of something, of things lost or almost lost, those tattered bits of the past we might still cling to.  But such sights are fewer and further between, and what lies ahead, just a few miles down the road, might be "The Ranches of Wildwood" or some similarly coronated new housing development all glitter and gold.

People have to live somewhere, they say, and developing economies depend on expansion, call them what you will.

It was a cold and dreary day (the start of so many nostalgic tales), so I made a fish stew for lunch.  I took some to my mother and ate another bowl for dinner.  The tenant stopped by to show me what she thought might be a snake skin she found on the floor of the apartment, and she left with a big bowl, too.  It was good and it is gone.

The skin, in fact, was not that of a snake.

I dreamed romantically of women again last night.  Unfortunately, each time, I was rejected.  What do you think that means, doc?

I will need to make some more soup today as the weather is. . . ibid.  A bean soup, I think. 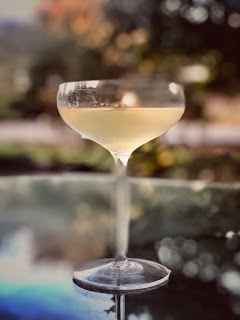 Speaking of "ibid," this went around to friends yesterday afternoon with the message, "There is nothing that competes with habit."  I got on the scale at my mother's house.  The weight I lost in a month of abstaining was gained back in a week of not.  Selavy.  I may stop again and see what happens.  It is not difficult.  It is just not fun.  Nor is being fat.  Dilemmas at the doorstep, I'd say.  Abstain and don't put on more pounds or have cocktails and look like Sebastian Cabot.  But as I said, even in my dreams I am being rejected.  The wages of sin, I guess, past and present.

I watched a YouTube photographer's (yes, that is a category) "documentary" on his week in Japan last night.  His girlfriend was Japanese and incredibly cute.  I want to go to Japan.  Not because of the girl.  I have wanted to for a very long time.  I may begin making plans.  It will be hugely expensive, but that is often the way of desire.  If you want to read something about Japanese aesthetics, I would recommend this (link).  I taught a course in the Art of the Personal Essay for a few years at Country Club College, and came to know of the essay then.  It was, for me, the stand out piece of the entire course.

The Personal Essay.  It is quite a category.  Almost anything is permissible.  But as we here well know, permission does not make the writing good.

I will go to Japan and look for the things that are being lost, I'm sure, just as I did in China.  And, per usual, I'll come home with a photo of an old field truck rusted and useless.