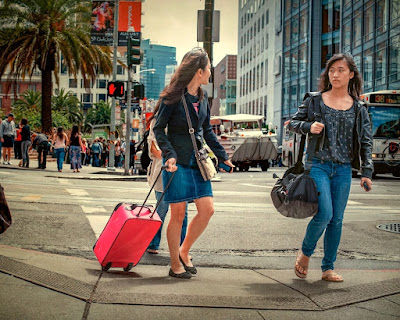 My beautician texted me last week to change my appointment.  O.K.  Then she changed it again.  Yesterday, she texted to have me come an hour earlier than scheduled.

Turns out the little scamp had Covid last month.  She is one of the anti-vaxers who said she was healthy, ate well, etc.  When she told me she was in bed for two weeks, I was stunned.  Then I remembered that she was unvaccinated.  It hit her a hell of a lot harder than it hit me.

I told her I didn't want my hair cut.  I'm going to let it grow.  Sure, she said.  She liked the idea.  When I sat down in her chair in front of the inevitable mirror, I could see that my belly has not gone away.  A month of sobriety and I'm still a fat pig.

When we were done, I was no longer a bright blond.  I never know what the hell she is going to do.

"Do you just use whatever chemicals you have left over when I come in?"

What I found out is that mixing chemicals is the kind of alchemy that people keep secret.  Colorists don't just give away their formulas, she told me.  When a client leaves and wants to take the formula with her--uh-uh.

So whatever.  When I went to the Home Depot the day before, I was referred to as "the blonde guy."  Not so much now.

Having seen my tub o' guts in the mirror as I sat embarrassedly before it, I headed to the gym to get on the treadmill and the elliptical.  Oh, yes. . . I was going to run the fat away.  This morning, I could barely get out of bed.  My back is not going to put up with any running, it seems.  I'm sitting in discomfort bordering on misery now.

But I didn't know that then.  The sudden inflow and uptake of O2, and the imagined weight loss I was experiencing propelled me forward.  I left the gym feeling like a teen.

I got home in the late afternoon, but since my mother is not in town--OH--DID I TELL YOU!  Yes, my mother decided to go to the coast with my cousin.  I may drive over to meet them in a couple days.  I will try to ride my mother's coattail of courage and actually leave the house.

But since she was not in town, my late afternoon was free.  Decided to pour a little glass of whiskey as it was close to cocktail hour.  Then I got the new saws out, bladed them, and put in a battery.  I thought I would just try them out.  Good idea, whiskey and power tools.  I don't know what my friends are worried about.  There I stood in bare feet, the reciprocating saw blade jumping around between them.  I just wanted to cut out a piece of the deck to see what was happening underneath, but by the time I was done, my forearms were pumped.  Manly work, I thought.  Then the word "binary" popped into my head.  I guess I have been re-educated as was hoped.

Having escaped my adventure bloodlessly, I put down the big pieces of plywood I had bought to cover the rotten parts of the deck and screwed them down.  I don't want anyone falling through while I'm away.  Now the deck really looks like Fido's butt, but I promise myself that this is only a brief remedy before I get serious.

Dinner time.  I pulled out the left over vegetables and cut them up to see what I had and what I didn't.  Broccoli, red pepper, purple onion, carrots, mushrooms, and cherry tomatoes.  O.K.  All good.  I drove to the store to get some cod, then Jasmine rice cooking, I put the veggies on the grill and powdered the fish.  I poured a glass of Chardonnay and lit a cheroot.  I had twenty minutes.  Cooking with wine.  Yes.

I plated dinner and ate out on the newly recovered deck in the candle light as the sun set.  The air was perfect in every way.  Dinner with wine, civilized, wonderful.  You can't eat a delicate meal with kombucha, and sparkling water really adds nothing.  Nope.  This was how life was meant to be.  Even alone, it was romantic.

I cleared the table and poured a scotch.  Q texted that he envied me the alcohol.  He is going for his 60 day token.  He said that alcohol was demonic.  I replied it was romantic.  He agreed.  As I sat at the table on the deck in the cool, purple light, my mind was writing.  There is a reason artists are drunks.  Without the Dionysian inspiration, you become Norman Rockwell. . . all barbershop and no intrigue.

Today I will finish up some things and pack my bags. . . just in case.

Apple Music played this for me yesterday.  It seemed apropos at the time.  The Road of Doubts, so to speak.  An old man is a wicked thing.