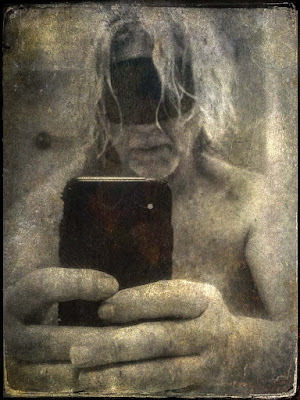 I've decided that it is a series of "Self-Betrayals."  I'll create a dating app profile for them.  Let's see what kinda gals go for this.  Sweet girls.  Lots of tats.  Many stepfathers.  A taste for heavy drugs.  Fun girls.  Or maybe I'll go on a gay site and see if anyone is interested in a bear.

But why must I be so binary?

Why must I be so ornery?

I watched the Super Bowl last night.  I didn't really want to, but you know how it goes.  I've seen them all. It is difficult to stop.  Besides, I got to text with my buddies during the game.  Sort of like "being there."

Then came the halftime show.  WTF was that?  Is that what rap used to be?  I thought it was all about dope and guns and bitches gettin' it on?  Back that bootie up and all that?  I wasn't really into it, so that may all be in my imagination.  Perhaps rap was always that milk toast entertainment meant for the masses.

Often, I just don't get it.

The Super Bowl is a hard game to watch because of Capitalism.  It seems about twice as long as other games, and they already have far too many commercials.  In the Super Bowl, teams can't establish a rhythm.  Three plays and a commercial--that's the rhythm.  Not "a" commercial.  Many.  Advertisers know their audience.  Apparently they are mostly tech guys using bitcoin who enjoy old music.

Again, I could be wrong.

Oh. . . it is Valentine's Day.  I'll need to get flowers for my mother.  I read today that most people will not give or get a card today.  Good.  It's not a real day.  It has gotten me into lots of trouble in the past.  I'm not really very good at it.  Or birthdays.  Or any other celebrate on command day.  I even fuck up Easters.  So if you were expecting to get something from me today. . . uh-oh.

Still. . . I'll probably be sad to get nothing from old girlfriends.  You'd think they would think of me today, right?  I'll wait anxiously for a card or a letter, but none will be in the offing.

"You should send THEM one yourself," you say.  But that is not how it works.  I am stoic.  I would rather be chased.

That, too, is on the rise.  Over a quarter of Americans haven't had sex in the past year.  Over 50% have sex once a month.  That is what I read.  I'm assuming, of course, that they are referring to sex with other people.  Q says the human race is worn out.  I say the American race is.  I'll bet the heathens are fucking like monkeys everywhere else.  But in America, sex is alternately sacred, sick, something one does to other people, a crime, for money, perverted, unwanted, and something a priest does to you when you are young.  It is something you can do and then think about and decide you didn't want to do and then cry foul.  It is something people want to do with minors.

Why does France want to become Americanized in this way?  They've always had the loveliest of ideas about sex, at least to the American Eye and Ear.  But it seems sex is being criminalized there, too.

Still. . . there are the "dating" sites.  And as I mentioned, I have my profile pictures all set.

None of it matters to me.  I'm a romantic.  All I want is to be with My Own True Love.  We would watch "our shows" and prepare for our monthly sexual encounter.  But there would be meals and wine and travel and art and literature.