The Envy of a Ne'er Do Well 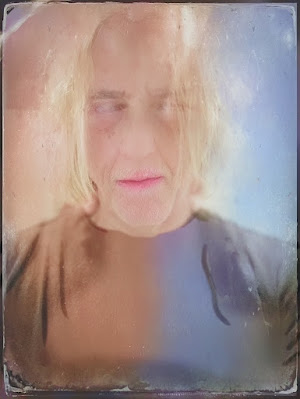 I woke up at a very decent hour after having slept through the night.  Well?  I thought I had, but the pillows were all over the floor and I couldn't quite seem to come to myself.  A patch of throat was dry and I felt drugged.  Sitting here now, I am really on the nod.  I will go back to bed in mere moments.  It is strange.

Perhaps I have Covid again.
Yesterday was a Sushi Friday, but before that I had gone to my favorite Spanish restaurant for calamari and sangria.  I sat at a nearly empty bar after the lunchtime crowd was gone.  Just me, a couple of women, and a guido, a swell who probably preferred sitting in a strip club.
Oh, you may think me an awful man, judgmental beyond necessity, but. . . well. . . maybe.  After he had gone and after the two women had paid their tab, I sat staring out the floor to ceiling glass front of the building, then with my thumbs, I wrote this.
After the Pandemic

“I’ve become the most hideous thing,” he thought. He was sitting at the lunchtime bar as was his custom. The beautiful waitress who had welcomed him back so warmly when he sat outside with his friends on his birthday did not look his way. He watched a man a bit younger than himself walk by on the highway beyond the giant plate glass window carrying a handled bag as he hurried to the bus stop. He was as many a man of his age, not bad but carrying the extra weight of accumulated years around his waist.
"I could write a story," he thought. "He is some girl’s father whose friend says, 'Your dad’s hot!'   The daughter laughs thinking it is a joke.
And the plot thickens.”
That is how he felt now, sitting at the bar, the accumulated weight of the years gathered about his own waistline. He couldn’t believe he had let it happen, but during the pandemic—for an entire two years—he had stayed home alone watching tv and reading. And drinking, he guessed. Probably he had drunk too much. And now, venturing out into the post-pandemic world, he was hideous.

Just then, my phone rang.  It was Q FaceTiming me.  Because no one else was at the bar, I took the call.  I told him of my lunch.  He bragged about his sobriety and his life's success.  He is moving up in the corporate world, it seems, without ever leaving home.  The more vacations he takes, the more they pay him.  It is a mystery to me, but the world is hideously unjust.  I expect him to join the church of whatever Theosophy-type religion people in the tech industry subscribe to, some mystic form of micro-dosing worship.  As I say, however, it all seems to be working in his favor.  Once money's got a hold on you, though. . . .
When I got home, I took a nap and didn't wake up until four.  Hurriedly, I got myself together and drove to the liquor store to get some sake, then I headed straight to my mother's where we sat out in the lovely afternoon air and chatted about nothing.  She had worked all day cleaning her house, and she was tired.  I told her once again she should get a maid service, and once again, she told me no.  Depression era hillbilly, she will never spend money like that.
In a little bit, I made a call to order my sushi dinner, and in a short time was back home eating on the deck.  The cat came to join me.
Later, I watched a documentary about Lee Radzwill and Peter Beard trying to make a film about the Beale's of Gray Gardens.  What they made was a lousy version of what the Maysles did so well.  I have been enamored of Beard and his life since I was a teenager or just beyond having bought a copy of "End of the Game" back then.  I'd never seen anything like it.  And Peter, probably one of the most handsome men of his time, lived in a tent on a patch of land attached to Karen Blixen's farm, and later, when I read "Out of Africa," my romantic imagination was set aflame.  I read everything, even small imprints of books by and about her husband Bror the Big Game Hunter, about her lover and her lover's infidelities and his tragic airplane crash that took his life.  Of course, he was supposed to be teaching Beryl Markham to fly that day, but she was otherwise engaged, and later I read her magnificent "West with the Night" and everything else I could get my hands on about her.
But listening to Beard talk recently, I realize he speaks in the exact language and tones of Donald Trump.  He, a black sheep trust fund baby of tobacco and railway money, was part of "that" world.  He traded on his privilege and his aristocratic manner and his godly good looks and spent his life as a traveling bon vivant known for his photography and scrapbooks.
Huh.  Funny writing that.
I made that silly picture at the top of the page doodling with an idea I had yesterday.  This is a half-assed attempt at an idea that may never blossom, but I have little else to post, so it made it here today.
Now, like some ne'er do well privileged son of Ohio hillbillies, I will take myself back to bed and see if I can't get up fresh in a while.  The day is grey.  It should be fine.
Posted by cafe selavy at 8:48 AM