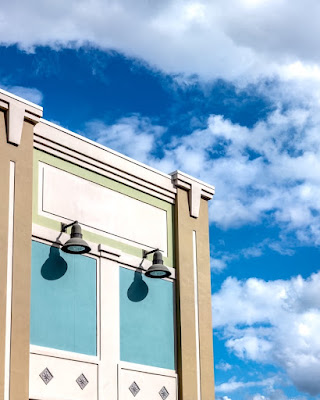 I couldn't find my glasses.  Nothing unusual about that, people tell me, except mine don't leave the house and I'm the only one who lives here.  Nobody much has even come into it in the past couple of years.  So this was a big mystery.  Where could I have put them?  They are the ones I use to look at the computer and sometimes, when my eyes are really tired or blurry, to watch t.v.  They are always--ALWAYS--in one of three or four places.
Well, not always.
I went everywhere I sit in the house, put my hand to my face, then stretched out my arm in every direction to see where I might have set them down.  Then I walked around the house and did the same thing.  Many times.  Many, many times.  I got down on my hands and knees and looked under everything in case they had fallen.
"Maybe I set them on the back of the toilet or in the sink."
I'd go look.  Nothing.
I took apart the couches and chairs, looked behind and between cushions.  I opened drawers, ran my hand along the bookshelves.  I thought back to when I last wore them.  Finally, I decided that I must have laid them on the kitchen countertop.  When I came home from the grocery story, I could have laid all the empty plastic bags on top of them, and when I picked them up to throw them away, accidentally grabbed the glasses with them.  The garbage collectors had already come.  I wouldn't be able to check.
Yea. . . that's right.  I threw plastic bags in the garbage.  I know. . . I know. . . .
Skip ahead.  After a couple days of not finding them, I decided to go to the expensive optical store on the Boulevard where I had gotten my frames to see what they had.  It was late Monday afternoon.  The Boulevard was pretty empty.  The sun was casting lovely shadows and the air was like "a cool glove upon your cheek" to steal a phrase from T.C. Boyle.  I'm usually sitting with my mother at this time or on my own deck.  I felt a stranger in an old and wonderful land.  I mean, I was more than happy.
I walked into an empty store.  Only the fellow working was there, a middle aged hipster with a small braided beard.
"Can I help you?" he asked.
"I was wondering if you sell glasses?" I said grinning.  Best to answer a question with a question.
"Oh. . . ha!. . . we have a few."
I started walking around the perimeter looking at frames.
"Watch out. . . here. . . let me move this so you don't trip."
"Dude. . . I see it.  I don't need glasses!"
Oh, yea, I was torturing the fellow.  What could he do?
I didn't see any frames that interested me.  They all looked the same-ish.  Then, just as I was leaving, I saw a pair in the display window.  I picked them up, walked to the mirror, and put them on.

"How much are these?" I asked.
"Oh, we just got those in.  The are handmade in Japan. . . a famous designer."
That didn't sound good.  That sounded expensive.
"Really?" I exclaimed, "'cause I thought they made me look Japanese!"
In truth, they would make anyone who put them on look a bit like Hirohito.
He futzed around on the computer a bit, then said, "Those are $375."
Shit, piss, fuck. . . I wanted them.  But $375 was just too much to pay to look a little like Hirohito.
"I'm going to think about them, of course, but I'll probably be back."
"O.K., man. . . take care."
Skip ahead.  Yesterday I did some chores.  I went to the Benjamin Moore paint shop to ask about deck sealers.  When I built my last deck, nobody I talked to knew shit about painting a deck.  Now. . . you can get stains and paints in any color.  And they can tell you how long to let the wood cure, too.
"O.K. I'll see you in three months."
Home Depot for a wheel barrow.  I just threw my old one away.  The metal frame had rusted through.  I should have fixed it.  I've been to three places now and can't find a replacement, a 4 cu.ft. barrow with two wheels.  The 6 cu. ft. one seems a bit too big.  And boy. . . does it cost!!!  I left thinking I might just buy the cheapest one wheel barrow I can find.  I don't want a one wheeled wheelbarrow, but I only use it once a year.
Liquor store.
Grocery store.  I wanted to cook up a bunch of chicken thighs and freeze some so I don't have to cook every single night.  There were a lot of chicken thighs, all boneless and skinless.  I wanted whole chicken thighs.  I looked high and low.  And just as I was about to tell the butcher what a shitty job he was doing, I saw a BIG pack of chicken legs and thighs.  There were six quarters in the pack, bones and skin included.  I looked at the price.  WTF?!?!  They were $5.95!!!!  Total!  What were they, I wondered, diseased chickens?   Fuck it.  I was going to pressure cook them for an hour anyway.
When I got home, I pulled down the InstaPot from the shelf and sat it on the counter.  I lifted the lid and reached in to remove the electrical cord.  But. . . what was this?  Like a box of Crack Jacks. . . .
Yea. . . you've guessed it.  How in the world?  It was a magic trick.  I thought back.  I had dished out the last of the small red beans and pork on Sunday night, then washed the metal container.  That night or the next morning, I had put the container back in the InstaPot, put the electrical cord inside, put on the lid, and put it back upon the shelf.  So how would my glasses get in there?
Am I getting old?  Am I losing my mind?
Maybe. . . 'cause I still want those Hirohito glasses.  It is a dilemma.
I cooked the thighs with salt, pepper, red pepper, four hot chiles, a white onion, and half a bottle of wine.  Holy smokes, they are good.  And the best part is. . . they didn't make me sick.  Four cooked chicken quarters now sit in the freezer.
That was a long way to go for little, eh?  Yup.  But I am still dazed by the fact.  It is not as if the glasses fell in there unless they fell up.  Maybe they were tangled up with the electrical cord.  That is all that makes any sense.  I don't know.  I just don't.
But, you know. . . I had to tell my tale.
Posted by cafe selavy at 9:47 AM