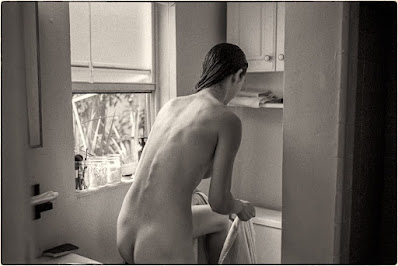 Boy oh boy, I bought a new blender.  I had a 1960s or '70s looking Osterizer in yellow Bakelite plastic with white push buttons that my mother had picked up at a garage sale when I was still a broke assed bitch of a school marm living in an almost one bedroom pocket sized apartment just off the Boulevard.  It worked like a charm, but my last girlfriend got rid of it because she had a brand new, high tech thing that chopped and diced and juiced, etc.  When she left, I was blenderless.

No more!  I got a $39 Black and Decker, and boy is she a beaut.  I used it yesterday for the first time.  Some milk, one yogurt, a scoop of peanut butter, a banana, ice, and some polypeptide collagen protein.  Damn, Sam, that was good.  Breakfasts now shall be that way.  I am going to start adding oatmeal to it.  Some flax and chia seeds.  Sometimes blueberries instead of bananas, sometimes peaches.  I may try some of the "other milks." I'm just psyched about it as you might be able to tell.

Yesterday, I bought some whey protein to make me big and strong.

No more skipping breakfast for me.  I'll soon reach my 300 pound goal.

And to cut down on my drinking, I end my nights with first a cup of herbal tea and then some Golden milk (link).

Whatever.  It makes me happier for the moment.  I am going to begin meditating again, too.  As I've told you, my mind and body are messes.  I've been very agitated and angry, dizzy and unwell.  I need the old mind/body connection that all you life coaches are so fond of touting.  I know all this shit.  I grew up with it long before it became commercialized.  I've always been down with it.  It is part of my cultural DNA.  It's what makes me special. 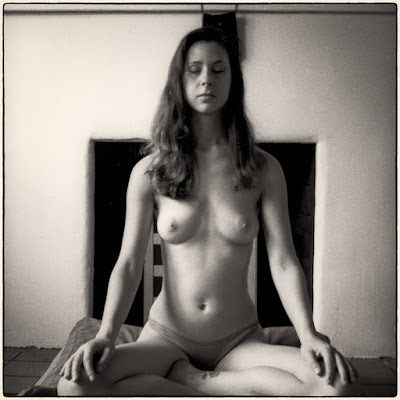 Speaking of Saul Leiter (yesterday), the photo at the top reminded me of his black and white work, much of it intimate photos of women.  I won't go on a philosophical/theoretical discussion of the work nor a technical breakdown.  These photos were of the second person I shot in the never completed "Home Alone" series.  The woman in these photos was wonderful.  She was a hippie vegan spiritual yoga person with what some of you would call a beautiful aura.  I just say she was a good person.  She was working late at a ceviche bar and told me she would leave the back door unlocked and that I should come over but not too early since she wouldn't get home 'til 3 a.m.  Good by me.  So somewhere mid-morning, I got some coffee and bagels and headed out for her house on the outskirts of Gotham.  It was a cool old house but she did not run the a.c. and when I stepped inside through the backdoor into the kitchen, it felt I had entered a greenhouse.  The place smelled like the litter box.  A real hippie girl, I thought, remembering all the ones I knew in college.

It's weird to walk into a stranger's house let alone a sleeping one.  I half expected some guy to be in bed with her.  I called her name and she stretched and opened her eyes.

"I'm awake," she said.  I gave her the coffee and bagels and began taking pictures.  I followed her through her morning routine.  She started her day with a sitting meditation.  She was well practiced, I guess, because her cat circled her constantly.

I wasn't going to post these photos, but I'm tired of the prevailing complaint. 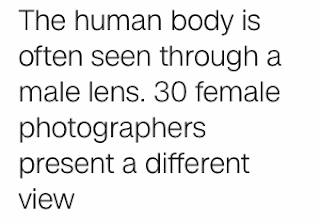 This was the banner for a story in the N.Y. Times today.  Let me be the first to declare this a tired, worn out cliche.  Cliches are cliches because they were once so fresh and good an idea that everyone latched onto it.  Through overuse, however, the idea loses its impact.  Mouthed through the lips of many thoughtless semi-morons, it just becomes tired and worn out.  I think it was a fabulous take decades ago.  It was a challenging idea.  Now that it has made its way into general usage, however. . . it has has lost its impact.  I'm all for women photographers taking photographs of anything in any way they want to.  I'm a big fan.  But I guess I don't want to be oppressed by a cliche any more.  The "male gaze" has become synonymous with lascivious hunger.  However, I think much of what is seen belongs to the eye of the beholder.  There are at least two gazes in every photo.  In this case, there were at least three.
I hope I'm feeling better today.  It is difficult to tell sitting here with a laptop and coffee.  Once I start moving, we shall see.  I had a rough night, but it was, I think, better than the night before.  My writing isn't as worried, anyway.  Not as.
Many of my friends are fretful about a nuclear war.  The west, we keep reading, is "fearful."  I hope I am never labelled "fearful."  I'm sure I am, but that is no way to be viewed or remembered.  What an obit that would be.
"He was a sad man who lived his life in fear.  He was afraid to anger people and was horrified of the thought of retaliation."
There are simply too many nukes in the hands of too many people for them to sit in silos forever.  Sooner or later, they will be launched.  Why else would people want them?  Climate change and global warming are stressing nations to extreme degrees.  The world has never been a happy place, but it is certainly not now.  If nukes don't get us, global pandemics and weather and geological catastrophes will.  I wouldn't want to be a kid right now.  It doesn't seem a lot of fun.  I think I grew up in the generation that had the most fun.  Jesus, I know that I did.  I'm sure that we weren't The Greatest Generation, but you know. . . it's not a competition. 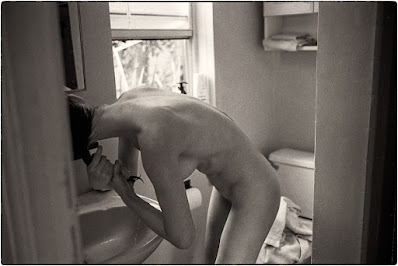 We sure spent a lot of time naked around one another, that's for sure, probably because fashion had become so terrible.
Make Love, Not War.
That, of course, became a cliche, too.
Posted by cafe selavy at 8:05 AM