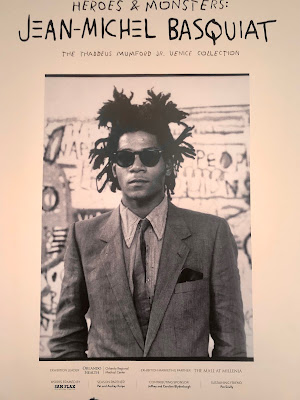 My own hometown's Gotham got a major show.  The museum has a new curator, and I've been impressed by the shows he has brought in and put up.  The museum used to be just pre-Columbian pottery and student exhibits.  Not really, but pretty much.  Now, it's exhibits are something to look forward to.  The space is nice, but they need a restaurant or at least a bar.  I will be making the recommendation.  It should be a destination for museum types. 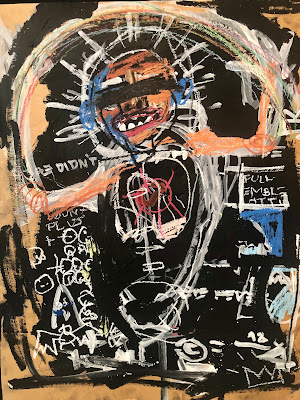 I'm not sure how I feel about Basquiat's art.  I'm not sure he was a draftsman.  I mean. . . I don't know if he could draw lifelike figures.  I've Googled that, but all I find are his primitive figures.  If that's the case, I must disagree with the comparisons of his art to Picasso's which indeed the exhibit did.  But as C.C. says, he's better than Haring.  I like the work.  What throws me, however, is that one of his pieces sold for 110 million dollars, the most ever paid for a work by an American artist.  That stuns me. 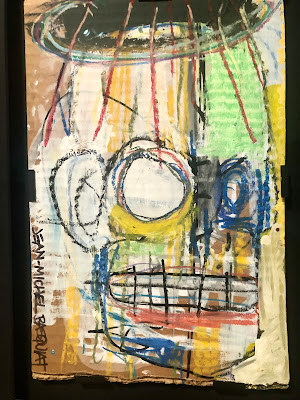 I went to see the show in some part because there is a real controversy around the authenticity of the works.  They are all on cardboard.  One of the works was found to be on a FedEx box, but FedEx hadn't used the design that was on the back before Basquiat died.  I'd say that was some pretty good evidence.  The curator, though, said something like, "maybe that one, but they aren't all fakes."  What I love about it is that the only way to authenticate the fuckers is by the stamp on the back of the box.  Otherwise everyone would think them real.

Oh, yea.  I'm making my own tonight.  On cardboard.  I'm going to set up a stand in front of the museum and sell them for $20 a piece.  It will be a little bit of performance art.  I could be notorious.

All the images, by the way, are phone photos I took at the show.  I mean. . . they are original art I've appropriated.  I'm like another Richard Prince, yo.  Don't be a hater.

Is it true that Brown Jackson couldn't or wouldn't define what "female" meant or is that some bullshit my republican friend is peddling?  I hope it is true.  Now that DeSantis has declared himself the enemy of all things "Woke," I can't use the term any longer.  It has come to mean little now that it is an invective in the mouths of conservative republicans.  But these ideological jihadists (your choice) have polarized ideology to the breaking point.  Perhaps something good will emerge.  If the left can't define "female" then it can't define "male" and things like the Male Gaze begin to lose their meanings.  Now that most feminist are men, I mean. . . .

Sorry.  That was a bit of goofy stupidness.  Sometimes I just like to piss people off.

It's part of my charm.