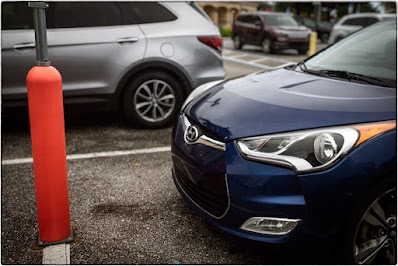 Back to the old Car and Post photos.  I imagine you are tired of seeing pictures of people.  Marvels of technology--that's the ticket.

The horrors of the night were accompanied by the illness of the day.  I was an achy, poopy fellow.  I think it must have been the ham and beans I ate at my mother's house on Sunday night.  My mother was sick, too.  My hillbilly cousin cooked it, and it was tasty, but I'm thinking that those ham and beans had to be the thing.  She didn't feel bad, but my theory has always been that hillbillies feel so bad all the time, it's just normal.  Never sick a day in their lives, they say as the rub their gassy bellies and belch and fart and cough.  I'm just pretty sure it was the meal.  Salmonella?  E. coli?

I barely ate yesterday and feel better today.  And I had no liquor.  Plenty of licorice tea for my belly, though.  Maybe I'll take a break and live the healthy life again.

The deck lady showed up early and got to work.  I'm paying her and she didn't want my help, so I'm not going to babysit and see what she needs ever hour the way I always do.  As soon as she got to work, I headed for the gym.  When I got back, she pretty much had the old deck demolished.  When I saw the underlying structure, I was pissed off.  The deck was 90% fine.  There were just a few boards that had rotted and disintegrated.

The rest of the wood on my beautiful deck looked brand new.  Fuck me.  But there would have been no way to repair it.  I would have had to take it all up anyway.

She lead me over to a flat pile of fur.  A dead possum.  Yup.

The city inspector car had driven by several times, she said.  I told her I thought it was o.k. As long as I am here, I will just say you are helping me repair the deck.  I think that's fine.  We can tell him we tore it up looking for my pet cat and then show him the ball of fur and start crying.  Sure, she said. . . that'll work.

It took her five hours to remove all the wood and eat lunch besides.  Unbelievable.  She sat around for awhile waiting for the delivery of the new wood.  When it came, she left.  I was feeling really terrible, so I went back to bed.  I woke up at five.  I called my mother and said I wouldn't be over.  She sounded worse than me and said that was o.k. that she would not be good company.

I'm hoping she is better today.

The cat came by for her evening feeding.  Freaked out, of course.  I put her bowl out and put food in it cooing to her as I always do.  She ate, then sat in the dirt where the deck used to be.  She sat there for a long time, well after dark. She never stays that long.  This morning, too, after breakfast, she sits in the dirt looking around.  Funny cat.  She should have a deck again tonight if it doesn't rain.  This woman works fast.

While she worked, I scanned more untouched negatives.  I have more to do today.  I'll eat lightly and drink tea and aloe.  Back to hippie nature, I guess.  I took pain medicine and a nerve pill last night but still didn't sleep well.  I was up four or five times.  Nightmares?  Apnea?

I've decided not to drink scotch until I can have the best one I ever have, the one I drink naked in bed after making love to my girl at night.  Getting out of bed naked, still looking like Prius, pouring about four fingers of Scotch and coming back to bed, lying in the afterglow, slipping into narcosis from hormones and liquor, spouting love with little kisses and gentle brushing of skin until the eyes get heavy and the light goes off and you cuddle up as lovers do, descending into that beautiful blue light of concomittant love.

Which means I may never have a drink again.

I hope I am sitting on my deck again tonight having dinner with the kit-kat.  If not, maybe tomorrow.  That is what I have now instead of amore.