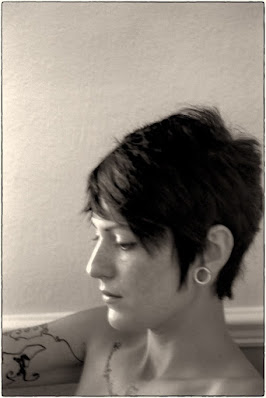 I've been scanning a bunch of old negatives I found that I had never touched before.  In the past ten years or so, they have gained some "charm."  I like them a lot now.  I didn't know this woman.  I was starting a series, and she was the first participant.  We communicated through email, then by telephone.  I drove an hour to her apartment in a coastal town early one morning.  Shooting strangers in their own homes was the idea.  When I got there, she was still in bed.  I documented her morning.  She wanted to be a writer.  She admired Anaïs Nin.  She made coffee with rum and smoked cigarettes.  She had many tats and pretty large gauge holes in her ears.  I shot her that morning and left.  I had taken too many cameras--digital and film, both 35mm and medium format.  I got nervous and made many exposure errors.  I abandoned the film cameras at some point and shot with the digital camera so that I could see what I was getting.  That is what she got back, mostly--the digital images I shot.  I never saw her again.  I look at the photos I am scanning and think it weird that she never got to see them.  I wonder how she's doing, if she is writing, etc.

Could I do such a thing now?  Would it be possible?

I developed three rolls of film yesterday.  They all came out blank.  I was doing my first stand development--no matter--and the old Rodinal that I used as developer must have been bad.  I didn't feel all that terrible, though.  I doubted that there was anything worth looking at on any of the rolls anyway.  Just a bunch of the same old shit.

Last night, I woke up in a panic.  More nightmares, I guess.  I felt disoriented and nauseous.  Maybe, I thought, I'm dying.  It was awful.  I didn't want to be alone.  "So this is how you've ended up," I thought.  "Big man, tough guy, a loner.  All the talk.  All the Existential bullshit.  Now what?"

I had to get up and walk around a bit.  Going back to bed, however, didn't get any better.

Perhaps I am just anxious about the day.  The deck lady begins early this morning.  There are many things I have to do before she starts.  Not many.  Just a lot more than I have to do in my usual day.  I worry that I won't like the deck when she's done.  I worry about everything.  My nerves are raw and jagged, too much so lately.  I think I'll quit drinking again and see if that helps.

It is another clear, cold morning.  I am tired from the restless night, but I have much to do.  I don't seem to be able to juggle all the things in life any more.  Keeping all the balls in the air is too hard.  But there aren't really that many balls.  Maybe I'm only juggling two, but I feel it's one too many.  Maybe two.

I really don't want to juggle any balls at all.