The Face of Liberty 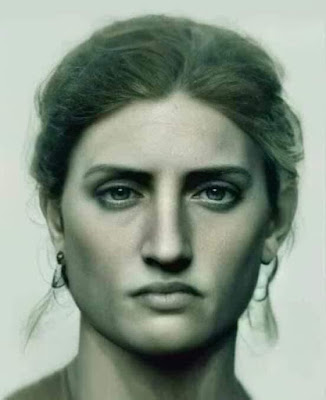 I came across this photo yesterday, reputedly a portrait of the woman who was the model for the face of the Statue of Liberty.  There is some dispute, but it sure looks like Lady Liberty to me.  And I am floored with envy and admiration.  That face has almost everything in it, beauty, strength, suffering, wisdom, determination. . . and of course, it made me reflect on the Ukrainian War. This is a daughter, a sister, a mother. . . and one wonders whether she will make it through the conflict.  People forget why so many struggled to come to the United States.  They were leaving something behind.

But I know. . . there needs be a Statue of Liberation for those brought here involuntarily, those who suffered in a different way.  No doubt.  I am for it.

There needs to be a statue for those from whom the land was taken as well.  And again. . . I am for it.

We need to remember that our freedom has always come through conflict.  History is a story of conquest and conquering.

In the west, now, we fight narrative battles.  Postmodernism taught us to distrust all narratives as they privileged one thing over another.  Always.  Indubitably.  Gender studies and socio-political arguments now hinge on this idea.  Disrupt the narrative.  Tell a different story.

Now, of course, people have forgotten that they are not allowed to stop.  Woke arguments distrust all narratives. . . but one.  Theirs is the only narrative.

That is how a generation has learned to fight.

Putin has learned those lessons, too.  One narrative and one only.  But. . . .

We've taken some staunch actions of late.  We have taken away the oligarch's toys.  We seize airplanes and yachts.  Holy smokes!  That'll show 'em.

I don't want to end up in the nuclear frier any more than anybody else, but we've known all along it could happen.  I grew up in the shadow of the A-bomb.  Duck and Cover and all that.  I grew up only a few hundred miles from Russian missiles in Cuba.  People in my neighborhood bought bomb shelters and had them put in their backyards.  Shopping centers had bomb shelter sales in parking lots on weekends.  I remember walking down the stairs into them with my parents thinking, "I don't want to live here."  Lead lined walls, air filters, large closets to store canned foods. . . . The more dollars you spent, the larger the space, the longer you could live underground.

Someone is going to use a nuclear weapon sooner or later.  It is not unthinkable.  Indeed, it is very thinkable.  Why do countries have them if they don't expect one day to need them.  The Ukraine is the only country in history to have voluntarily given up their nuclear weapons.

Every day and night, we in the west can watch Russian troops shoot and bomb women and children.  It is a stain on us that will never be cleansed.  To sit and watch and try to stop it by seizing yachts and going to court while complaining about the falling markets and the price of oil. . . .

It is hard to be happy when there is so much suffering right before your eyes, and I have to close them from time to time.