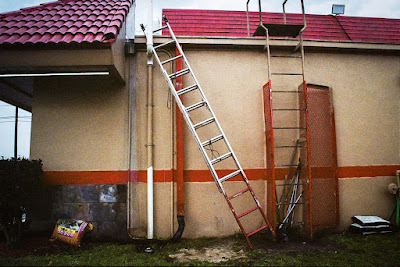 I had a doctor's appointment yesterday.  It was a three month follow up.  My blood pressure is high and I'm on the max dosage of the meds I can take to lower it.  Somehow, it's just not working.

I hate going to the doctor's office.  I feel degraded when I go.  Shitty waiting rooms play ads for medicines to counter diseases you might not even know you have.  There is no way to relax.  Were I designing a doctor's office, the waiting room would be a most inviting place playing hippie trance music that puts you in a deep state of relaxation.

But that isn't the case, so by the time I get into the room where they weigh me and take my blood pressure, I'm jacked.

I had decided before I went, though, that my bp reading was probably going to be high.  "It's not your fault," the doctor has told me.  "It's nothing you did."

Genetics and time, she says.

She sent me to a cardiologist last year.  I went through the battery of tests.  My heart was fine.  The doctor had me take a sleep apnea test.  When the results came back, he had a company send me an aqualung (i.e. CPAP).  I couldn't sleep with it.

"Did you go see Doctor So and So," my physician asked me yesterday.

She wants me to get the latest treatment for apnea, an electrical device that is implanted below the skin of your upper chest.  It has an electrode that stimulates the nerve that controls the movement of the tongue.  When it relaxes, the device sends an impulse to keep it from retracting.  You turn it on and off with a device that looks like a ray gun.

"So were CPAPs," I said.  "Now there are hundreds of lawsuits over them."

She stared at me.

"High blood pressure isn't a disease, it's a symptom of an underlying disease.  Hardening of the arteries."

She went on to compare my body to a house built in the 1920s.

"When the house was built and the plumbing put in, the pipes were good.  Over the years, however, calcium deposits begin to form and the pipes wear out."

"Do you see a nephrologist?"

"You should see one.  Nobody knows more about high blood pressure than they do."  She took out her prescription pad, wrote out a referral and handed it to me.

"I have friends who are medical doctors," I said.  "I even dated a neurosurgeon for awhile.  I learned a lot about doctors then," I grinned.  "None of them give out medical advice, of course, but they all have a version of what I heard a famous cardiologist tell a fellow going in to have his knee replaced--'When you go to the barber, you get a haircut.'  If I have a bone spur in my heel and I go to a surgeon, the surgeon will want to cut it and boot me for 90 days, but I'd probably have the same result if I just put the boot on for 90 days."

That made me feel better.

For a minute.  I had one last caveat on my way out, though.  At the window of the receptionist there was a sign that said "Check Out."

"Listen," I said, "you need a better sign.  I'm here trying not to 'check out.'  Maybe it should say, 'see you next time' or something a bit more positive."

The staff in the office all laughed.

My friends are all wearing out.  There are myriad problems.  Who'd have thunk it?

I spent the rest of the day on the internet looking for solutions, but I couldn't find anything on how to maintain eternal youth.  Nobody's lived forever so far.

Today, a new reality, or so it seems.  All I can control is my attitude, I guess.  Maybe.  I probably can't control that, either.  The idea that we have any control in life seems sillier all the time.  Everything is luck, bad or good.