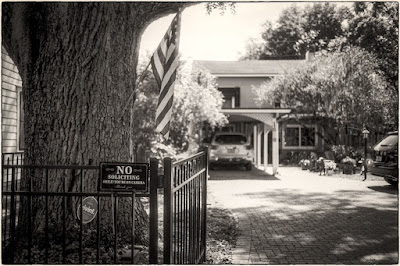 I went out with the factory kids last night--and they were actually there!  Of course I faced a lot of ridicule for being a retiree who doesn't know what day it is.  But it was a grand time for about four hours.  And unlike last time I left that restaurant after meeting with the group, I didn't make that slow motion tumble into the bushes on my way out.

It was about nine when I got home.  The cat was lying on the welcome mat outside the kitchen door.  I hadn't expected that.  She often doesn't come around for meals, but lately, she seems much more dependent.  So, as is our usual routine, I filled her dish, poured a drink, lit a cheroot, and sat out with her while she ate.  The night was just chilly and the air felt fine.  I poured another drink when the cat finished her food, but she didn't leave.  She went around the garden a bit, but finally she went wherever she spends her nights.

I turned on the television.  Just something before bed.  YouTube.  Apparently, we are all tired of the Ukraine horror.  It is too big and we are too small, and it reminds us that the United States we thought we lived in does not exist, that we are not the defenders of the free world, that we fear the great Russian Bear as much as anyone.  Impotent on the world stage, we turn to domestic problems.

I watched Court TV clips of the Johnny Depp/Amber Heard trial.  Jesus.  I can't look away.

I am certain that all across the world, people are watching and identifying with one of the two parties.  Or, like me, they are simply fascinated by the idiocy of it all.  We have all been idiots in relationships to some degree, at the point where we hang on to a sinking ship thinking it won't go down.  All the arguing, and in this case, all the violence.  Where have all the recordings come from?  I thought that such things weren't allowed, that they could not be used as evidence in court?  Every audio and video recording they play makes me wonder at all the things not recorded, makes me think about how skewed a life edited by others can seem.  The crazy marriage, the outraged husband or wife, boyfriend or girlfriend. . . .  We get to see that money doesn't change any of that.  It all looks just like home. . . except they have multiple homes, penthouses. . . and somehow it must make people fighting in their trailer park homes feel better.

But maybe Bill Murray is, too.  Remember?  He played Thompson in a film before Depp did.  Now they have stopped filming a movie in which he starred because he has been accused of "inappropriate behavior."  God. . . what has he done?  Now come all the stories and reports of the things he has done in the past.  Terrible things like calling people names, insulting them, using inexcusable language. . . .

I thought we enjoyed famous people BECAUSE of their inappropriate behavior.  They got to act in ways we couldn't.

I guess the thrill, in the end, is to watch the plane go down.

I had a call early this morning from one of the old factory members wanting some advice.  Well, now. . . that kind of breaks me up.  Or would, but I had to limp to the phone and try to speak.  My voice was crackling and phlegmy.  I know that going out like I did last night has consequences.  Bill Murray and I are close in age.  I should take heed.  You know. . . saying and doing things that others wouldn't say or do was always my M.O. at the factory.  Everybody enjoyed it then.