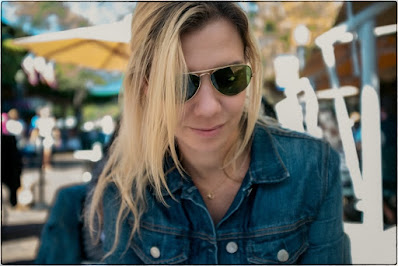 As much as I like the hippie vibe, you know, I'm really more of a Bohemian.

I just Googled "what is the difference between hippies and Bohemians."  Every response on the first page had to do with clothing.  I am definitely boho when it comes to that.  I guess both were fond of romantic expression and each rebelled against authority and convention.

Regardless of what I am, I am attracted to the BoBo, "a member of a social class of well-to-do professionals who espouse bohemian values and lead bourgeois lives" (Webster).  Like Biden, "I want to hold 'em and to hug 'em and to kiss 'em and to squeeze 'em."  I love the "radical chic" of them.  A pretty bohemian in upper class styling does more than just weaken my knees.  A smart gal, say an attorney, who loves to buy sage to chase away any bad spirits, who has crystals at her bedside, who introduces me to new things like Boba tea and dresses in Indian silks when watching t.v. at home.  Yup. . . that's the sort for me.

I’ll make love to you, if you want me to.

Shaven legs and botox are fine, and the sweet smell of spa treatments and success.  I just wanted to make that clear.  A weekend at the Breakers.

As you might have recognized, I have been listening to "Revolver."  It is the transition of those Fabulous Mop Tops to a Magical Mystery Tour.  Leave out all the songs by McCartney, the ones he sings.  He never wanted to quit being cute.  Leave out the Ringo song.  Good drummer, but. . . no.

I got up early yesterday, read and wrote, then, indeed, I headed out to the city streets in Gotham.  It was just before nine, I think, and the light was phenomenal.  I parked the car and threw some film in the camera and began my hike.  I don't know if any of the pictures will be of use, but it felt good to have the dual purpose.  Walking empty streets.  Stopping to make more images of buildings and things.  Somewhat redundant, I know, but it was better than hanging around the house.

I saw a fellow I used to work with at the factory in the gym yesterday, another straw boss, and he told me that he and his wife had gone to Cumberland Island for a few days.  Stayed in a B&B.  As he regaled himself with details of the trip, I thought, "Now there's a possibility.  There is a thing I might do."  Indeed, I am looking into it now.  I can drive there in a few hours.  Take some cameras.  Do a little exploring.  I think that might just be the thing to get me off my duff.