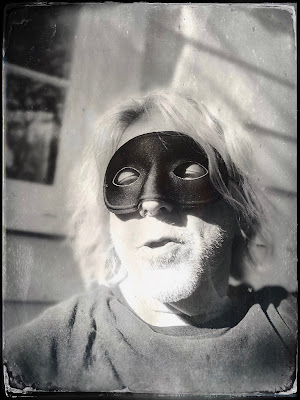 The days are getting warmer.  The humidity is rising.  The days are still pleasant, but everyone has that terrible notion of what is in the offing.  We've had a string of the most lovely days anyone could want, a fairly long string of cool, clear, dry days with pastel skies and soft breezes.  When the breezes end. . . watch out.

But to my waning powers.  After the gym, I went to lunch at my favorite Spanish place.  I didn't send any photos to my friends, though, having been chastised for "the same old same old" the other day, so I sat at the bar "virtually" alone.  Utterly, really.

I had the same bartender I often have on weekdays.  She is a nice woman with two children and a husband.  See?  She used to be chatty.  But she wasn't as friendly yesterday.  She was chatty, just not with me.  It hurt my feelings.  But, you know. . . sometimes I guess I come off a bit like the fellow who lives underneath the highway.  I don't know.  I didn't check my hororscope to see how the Neptune/Mercury relation was going.

I had wanted to walk and take some photos after lunch, but I really wasn't in the mood.  Maybe it was being ignored.  Maybe it was the Sangria.  I went home and took a nap.

When I got up, I didn't feel right.  It was late afternoon.  I wanted to develop the film I had shot over the weekend, but time was running short if I was going to go to my mother's.  I was slow moving, sluggish, but I decided to give it a go.  A trip to the garage with the film and the new bottle of developer that needed mixing.  I put the film into the changing tent and tried to pry off the canister caps with the expensive film canister opener I recently bought.  It didn't work.  I tried to muscle it, but as I say, my super powers had waned.  I took the film back to the house where the little film retriever tools were.  I should have done this in the first place.

It took a few too many attempts, but finally, the film was ready to load.  Back to the garage.  But the tenant caught me.  She wanted to show me something that needed repair.  Right.  O.K.  I'll get right on that.

We chatted.  Time moved on.

Back to the changing tent.  Film in the developing tank.  But when I mixed the developer, it was too warm.  Back to the house to get some ice.  Back to the garage.  Wash the film.  Develop for nine minutes.  Wash for two.  Fix for four.  Hypo clear.  Rinse.

I took the tank back to the house to do the final rinse in distilled water.  I pulled the film out to see.  Piss, shit, fuck.  There were only ghost images.  The film was completely underexposed.  I would never be able to pull decent images from it.

C.C. texted me the death notice for Gilbert Gottfried.  Kryptonite got him, I guess.

The world gets smaller.

"You're so lucky to have your mom."

I poured a rum and coke, lit a cheroot, and went to the deck.  The cat was waiting.  It was past her mealtime.  I thought of something.  When I went inside to get her food, I grabbed the mask.

I smoked.  I drank.  I took a selfie and sent it to Q.  He sent me back a photo of me from twenty years ago.

"What happened," I asked?

I put on the mask.  Superhero or Supervisor of Lonesomeville?  I couldn't decide.

I decided to send the photo around.  Another in the Self-Betrayal series.  The same old same old.  I've been making many.

I like shooting film, but I hate how awful it can be.  It is expensive, and it is often difficult.  When it works, it's great, but digital works all the time.  I'm fatigued by its immediacy, though.  It's too much too soon.  Film is a mystery.

The morning has grown bright. I must go out and lose some weight if I am to fly again.  Q has not had a drink in 2022.  He has lost ten pounds.  That is about a gallon and a half of whiskey or 17 bottles of wine.  He is marching toward his six month badge.  He has superpowers.

I cannot let him know that I've lost mine.