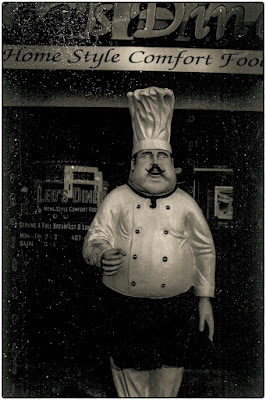 Just another ruined piece of film--operator error.  Still--fun.  This is the shape I'm beginning to take, going the way of Brando or Welles, etc.  It is what happens to people with appetites, I guess.  The Way of the Wicked.

I have been a bit amazed by my A.A. sponsor.  He has been able to turn his back on the past and look forward to the day when he can walk with the righteous.  It makes him happy.  The cynicism is gone from his conversation.  His grin looks more genuine.  He is looking forward to a year clean and sober, he says.  His friends tell him that after a year, you don't even miss it.

Wait.  What?  His friends tell him?  I see.  He has a lot of rehab friends, he replied when I questioned him. People who had lived that lifestyle. . . .

O.K.  This begins to make sense.  I have no friends in rehab.  Never knew one.  My friends were always wine with dinner, cocktails at sunset, maybe a little smoke on the weekends. . . maybe.  And I even played in a band for years.  Now I'll admit, we never got laid.  We did not party after a gig.  We never tore up a hotel room.  We were bohemian commies, the intellectual sorts.  We enjoyed the metaphorical power of drugs, but not the true lifestyle.  We read Thompson but never partied like him.  I inhabited the pretend world, I guess.

I was a sweetheart romantic who only wanted to be with his own true love.

I was always pretty careful.  And I ate well, exercised, played sports, and worried about toxins.

So now it all makes sense to me, but it doesn't seem fair.  Why do the crazies who go to rehab get to be happy while I become the fellow on the the Moretti beer label?

It is all the more evidence to me that life is absurd and there is no use talking about fairness.

I told him this would happen, though, on his 30th or 35th birthday.  Wrote him a long email describing what would happen in the coming years.  I nailed it, too.  To the tee.

In a menacing and decadent world, though, perhaps it is best to give up your evil wicked ways.

Putin/Trump/Jong-Un will triumph as we rapidly slouch toward Bethlehem.  The Spiritus Mundi of these fucking geeks will prevail in this widening gyre.

And I'll be too fat and crippled to outrun them.  My focus narrows.  There is the garden which is growing wonderfully wild.  The birds have come back to the feeders.  I'll spread my mulch and stain my deck, and I'll continue to take photographs of nothing with my many cameras.

I am a man alone, and you know what chance a man alone has.  No bloody chance at all.  But like C.C. always tells me, fuck it. . . if it gets too bad, just join a church.

Or, of course, there's always A.A.